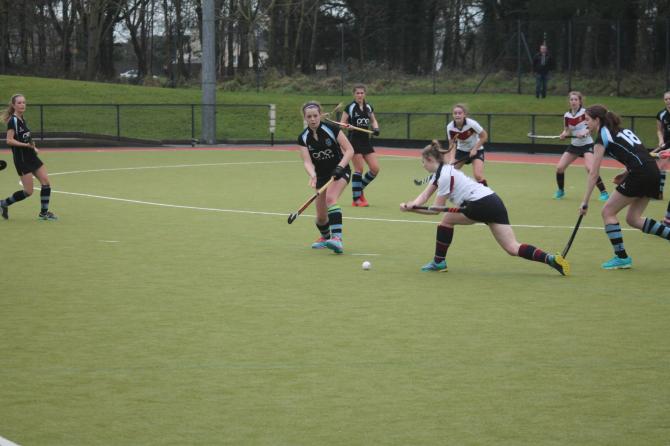 Action from Thursday’s Ulster Schools Cup quarter-final when Royal School Armagh were knocked out of the competition by Banbridge Academy after a goal in the last minute of extra time.

The captain of Armagh Royal, Lauren Wright, won pass back for her team and at 5.30pm the whistle blew and the ball started rolling with a strong pass from Lauren straight back to their centre mid Olivia Berry.

Banbridge Academy started strong, pressing Olivia hard who relieved the pressure by sending the ball back into the defence. The ball was picked up by RSA’s centre back Jemima Stevenson, who sent the ball wide to Poppy Smith who then played a perfect ball up to Yasmin Morrow. She used her speed to beat the Banbridge defence and two minutes into the game she won the first short corner. The ball was pulled straight out to the top where Stacey Livingstone smashed it at goal. Unfortunately, the Banbridge keeper made a brilliant save but Lauren Wright’s quick reactions led Armagh into an early lead with the ball being powered back into the net.

For the next 28 minutes Banbridge came back strongly and constantly attacked RSA, but with RSA working together they managed to keep Banbridge out. The Royal remained calm and patient, and this worked well as, when they finally got the ball, their counter attack was extraordinary. When the half time whistle blew the score remained 1-0. The girls got a good positive team talk from coaches Greg Thompson and Scarlet Holdsworth and were determined to add to their lead.
The second half was an incredible 30 minutes of hockey with both teams putting their all into winning and it was clear how much they both wanted it.

Banbridge won multiple short corners but Armagh’s keeper Rachel Martin saved all of the attempts with strong clearances from Katherine Magowan on her post. Armagh eventually won a corner but unfortunately it was not successful. With the clock ticking and Banbridge becoming closer to losing out on a position in the semi-finals they were not giving up.

The last five minutes of the game was just desperate attack; eventually Banbridge managed to fire a short from the top of the circle, leaving the score 1-1, with only three minutes to go.

The match then went to extra time. Despite Armagh creating some good opportunities to score, Banbridge’s keeper made a couple of super saves.

In the last minute of extra time Banbridge captain and Irish Schools’ player Katie McKee got their final shot, smashing the ball into goal to win the match for her team.

Armagh must be congratulated on helping to make it a super, exciting game and wish Banbridge all the best in the semi final on February 21.

The Royal School Armagh U14 XI beat Glenlola Collegiate 2-0 last week to reach the ¼ final of the Ulster Junior Plate when they will travel to Friends School Lisburn.