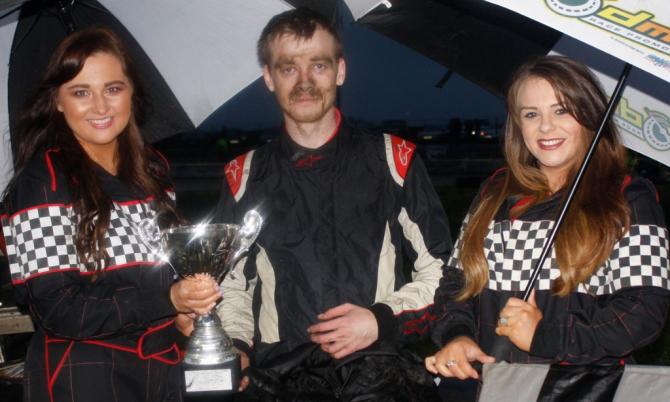 Portadown’s Lee Davison won all three races in the Superstox at Tullyroan Oval on Sunday and is presented with the trophies on behalf of Hoggs Bar, Loughgall.

AN exciting afternoon of international Banger racing at Tullyroan Oval on Sunday saw the race fans treated to some top class action.

Through the chaos Team Sour B came out on top to land the coveted Irish Teams Championship, with the title chase going right down to the wire in the final event of the day.

There was a dream National Bangers debut for former National Hot Rod World Champion Adam Maxwell, as he steered his Mondeo to a perfect win in the feature race final. In the supporting classes at the Hogg's Bar, Loughgall sponsored meeting, there were victories for Scotland's Bailey Millar in the Ninja Karts and Glenavy's Mark McCambridge in the Lightning Rods, whilst Portadown's Lee Davison took a faultless hat-trick in the Superstox.

An excellent entry representing 15 teams gathered for the annual 2L National Bangers Irish Teams Championship, including some very welcome English and Scottish visitors. Irish Champion Leonard Dunn wasted little time in declaring Bad Company's intentions of retaining their title as he raced home to victory in the opening heat amidst carnage on track. The action came thick and fast, with World Champion Steven Bolton and Adam Maxwell filling out the places. Heat Two saw yet more spectacular hits, as England's Ricky Hutton took the win for Team Sour B ahead of Team Buckle B's Bolton and Matt Butcher from Team Sour C. Some superb pit work saw another good field returned for heat three, which fell the way of England's Mark Merchant for Team Sour B as only three cars went the distance.

There was an early stoppage in the final as Willie McFaul took a hefty knock on the back straight, as Maxwell and Hutton disputed the lead out front. Maxwell took a sensational win on his class debut, with Hutton's second putting Team Sour B well clear in the points race. 20 cars returned for the DD, which saw Ryan Patton go for a rollover across the infield. At the resumption of hostilities the action centred on turn one which some tremendous hits being dished out. Hutton eliminated his rivals to take the win and the title for Team Sour B over their stablemates Team Sour A, with Team Buckle B in third place. Hutton, Gary Lee, Paul Stafford and Mark Merchant celebrated their title triumph in style.

At the end of a very toughly fought meeting, Bad Company's Karl Smyth took both the Entertainer of the Day award and the Best Wreck trophy. Karl's Vauxhall people carrier took a battering all afternoon but he kept returning for more, until it was totally obliterated in the DD.

Lightning Rods
With their World Championship being staged in Northern Ireland this season, it was pleasing to see a great field of 21 Lightning Rods take to the grid for their opening heat. There was an early stoppage in heat one when Jonny McMillan lost a wheel, whilst Tam Agnew was given an early bath for spinning Chris McGirr. Tim Hazlett took up the running but had no answer to the flying Nigel Jackson, the Irish Champion sweeping past to take the victory over Ricky Shaw. Hazlett made no mistake in the second heat, getting the better of a battle for the lead to take the win in the sodden conditions over Jackson and Vince Litter.

The final saw a great battle out front as heat winners Jackson and Hazlett challenged leader Mark McCambridge. Hazlett went out, and despite the gallant efforts of Jackson it was McCambridge who held it all together to take a morale boosting feature race win. Jackson, Feargal McNally and Shaw filled out the top places.

Superstox
The open wheeled Superstox coped admirably with the tricky conditions, with James Turkington leading the way before losing out to a flying Lee Davison. Davison was in superb form, taking the chequered flag over Stephen Stewart and Turkington, before repeating the dose in heat two with another great win with Stewart again in second. Turkington again set the early pace in the final, but was helpless to hold back Davison who powered through and on to record his hat-trick, celebrating with a 360 degree spin over the line. Stewart, David Beattie and Turkington filled out the places.

Ninja Karts
The local Ninja Kart stars were joined by welcome Scottish visitor Bailey Millar, and he would feature in the premier places all afternoon. The star of the heats however was Lacey Bevan, as she drove two fantastic races to take both victories. In the opener Lacey just held off a fast closing Millar, before reaching the chequers ahead in heat two despite Millar and Max Hobson bearing down on her fast. The final saw most of the field delayed by an opening lap skirmish, which left Ryan and Lauren Berry well clear out front. Millar was first to break free from the pack in his new SLS kart, and his quickly chased down the leaders to power ahead and take the silverware back across the Irish Sea. Irish Champion Daniel Stewart took second ahead of
Hobson and Jack Morrow.

Next Meeting
The first meeting of the 2018 season proper takes place at Tullyroan Oval on Easter Saturday March 31st (6.30pm). Topping the bill will be the Irish Open Championship for the Stock Rods as well as 2.0 Hot Rods, Superstox, ProStocks and Junior Productions.