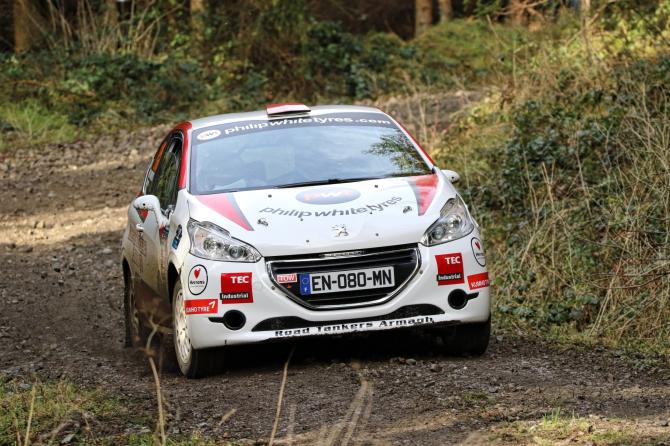 James Wilson & Gavin Doherty on their way to R2 victory in Carrick on Suir. Image courtesy of Gearóid Mac Suibhne.

TWENTY-TWO  year old James Wilson from Keady and his Co. Derry co-driver Gavin Doherty are on the crest of a wave at the moment in rallying. In 2017 armed with a new left hand drive Peugeot 208 R2, they sailed to victory in the hotly contested R2 category on the prestigious Irish Tarmac Rally Championship, and on their very first attempt. Last Saturday was their first attempt at forestry rallying in the Peugeot, and again they outshone the competition to take a sensational R2 victory on the Carrick on Suir Forest event.

The rally was the first round of the Valvoline Motorsport Ireland National Forest Rally Championship, the County Armagh based team electing to contest this series, and also to take the big step to the MSA British Rally Championship this season. Now with these recent successes the crew have proven themselves to be ones to watch for the future. “We went to Carrick on Suir really to test the car. We had no miles in it at all on gravel, and that was the aim to get familiar with it all. The first two stages were a learning curve, but the car felt very good, and we took it steady, not feeling we had done anything exciting. However when we got into service we got the thumbs up, and the times were actually up there which was a surpise to us” said James.

On stages three and four James and Gavin continued to punch in the times, and felt more and more competitive on the gravel and also on a Kumho tyre, a product new to them. “We had great support all day from David Moynihan from Ears Motorsport Ireland, and that was a help all day to keep an eye on the tyres and conditions. I must say that the Kumho’s worked very well for us all day, and we got into a great battle with the R2 Fiesta of John O’Sullivan, the similar 208 of Marty Gallagher and the very rapidly driven Nova of Derek Mackeral. We were also enjoying the rally so much! There was no real pressure, and the stages themselves where fantastic to drive, especially the long eighteen kilometre stage which had everything in it from fast sweeping sections to tight narrow sections.” After six stages Mackeral had a narrow 8.7 second lead over James’s 208, with John O’Sullivan now a further 31.3 seconds back, and Marty Gallagher now on the retirement list.

The pressure was on as they headed into the final two tests which where run in darkness, and immediately Mackeral was out on the first one, whilst James had his own challenges. “With the reverse seeding we were staring behind slower cars, and with some drop outs, we actually ended up catching two cars on stage eight, and three on the final stage. We were worried that it would affect our position, but in the end it didn’t.” The finish saw a maiden R2 victory on a Valvoline Forest round, fourteenth overall and second two wheel drive finisher, a dream result on what was thought would be a test session for the crew.

“It puts us in good spirits for the first round of the BRC, and we plan to contest the second Irish Forest round in Limerick, just a week before that. The result also helps us in the new Ears.ie R5 Challenge, and I am also eligible for the Motorsport Ireland Billy Coleman Award in 2018, so there are a few opportunities available and more with the BRC as well” said the young engineer. As ever the search for the vital backing is on at the start of the season, and James is grateful for the support from Tec Industrial for the first two rounds of the Irish Forestry series. Some support is set to come again from Philip White Tyres,Road Tankers Armagh, James Wilson Garage Services, DC Drive and Herrons Country Fried Chicken, but he’s still on the look out for one or two major backers. “Hopefully the recent run of success will help us obtain the backing to enable us to really attack the BRC and the Forestry achieve our goals.” Certainly James Wilson has risen to prominence in the R2 category of late, and it’s the Keady driver’s rapid rise that is making many take note.