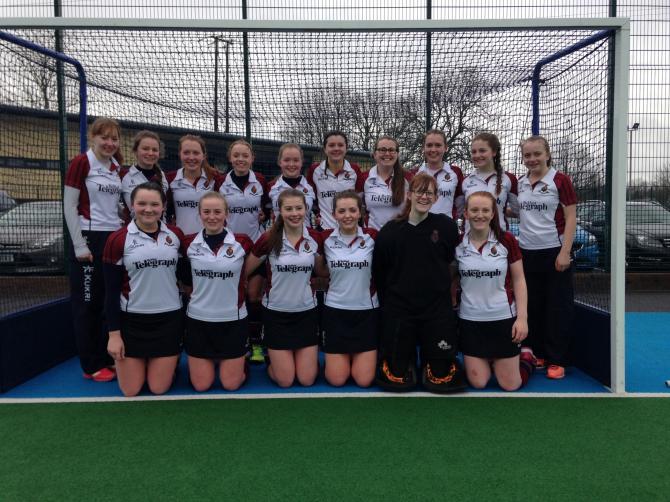 Royal School Armagh 2 XI will take on Starthearn School in Belfast in the final of the Ulster Plate.

ON 7th March the Royal School Armagh 2XI travelled to meet Methody College Belfast in the quarter-final of the 2X1 shield Queens University, Belfast. It was a cold day, however, the team soon warmed up following a goal from Sophie Anderson. The defence of Hollie Calvin, down the right, and Rachel McNiece, down the left, cleared balls from defence throughout the first half, ruling out Methody’s chances of a goal.

After a long corner taken by Methody, Armagh’s defence managed to send a crashing ball up to the forwards which made for a subsequent short corner in the final few minutes. Thanks to goalie Emma Whiteside, the team conceded no goals in the first half leaving the score at half time at 1-0, keeping the team’s spirits up. The second half quickly saw the team increase their score with goals from Lucy Finney in a short corner, followed by a score from Leah Graham passed to the flick spot by Eliza O’Gorman from the left. Rebecca Armstrong made convincing runs down the right hand side, after being subbed on. Help from the midfields saw the team win a short corner. They had no luck as the ball skimmed past the goals however, tackles made by Aimee Rowland in the centre of the defence managed to stop Methody and push the ball back up into comfortable space for Armagh’s forwards to make use of. Later on Armagh confidently defended two short corners from the Methody side, robbing them of any chnace to strike.

Advances from Alex Rainey in the centre along with promising balls from Karyn Nesbitt in left mid-field aided the side to victory. Armagh coped well under pressure when the ball was inside their twenty five metre line and this impressive teamwork helped to secure their place in the semi final scheduled for the 10th March.

On Saturday 10th March, The Royal School Armagh 2XI hockey squad travelled to Lurgan College to face Ballyclare High School 1XI, in the semi-final of the Ulster 2XI plate. Armagh started off with high tempo and work rate which resulted in great passing throughout the three Armagh midfielders Karyn Nesbitt, Alex Rainey and Anna Jennings. This resulted in excellent distribution to the Armagh forwards including the Armagh’s Zoe Rafferty and Laura Hampton creating trouble for the Ballyclare defence. With great balls from Holly Calvin up the right hand side resulted in a well won short corner for the Armagh side. Lucy Finney positioning herself well with a shot on goal to bring the score to 1-0 at half time for RSA.

The second half resulted in Ballyclare dominating the play. With tight marking and strong clearances from Aimee Rowland and Rachel McNiece made it extremely difficult for the Ballyclare side. Ballyclare were eager to push back on Armagh’s defence and managed to win a short corner just before the end of the final whistle. However, the ball could not be kept away from the goal line and Ballyclare scored, leaving the score at 1-1 at the final whistle. In the extra time Armagh were determined to go out and seal victory. With coaches Sarah Welshman and Greg Thompson giving the Armagh girls a vote of confidence, Armagh were ready to come out with a sheer passion to win. In the early stages of the extra time,

Armagh clearly dominated the field. Pressure was resilient from Rebecca Armstrong and Leah Graham as they were eager to challenge the Ballyclare girls. With a superb crash ball from Sophie Anderson into the Ballyclare circle left Eliza O’Gorman with a great shot on goal resulting in a fantastic 2-1 lead for the Armagh girls. The work ethic was superb from the Armagh side to ensure they did not let any chance for Ballyclare to slip through. With minutes left Armagh took their last chances. With clever passes and fast movement from Anna Jennings and Sophie Anderson left the Armagh girls looking dangerous in the Ballyclare circle. However, a last minute counter attack from Ballyclare resulted in a short corner against Armagh right at the final whistle. With some fantastic runs from the Armagh defence and superb saves from the Armagh goal keeper, Emma Whiteside, resulted in the Armagh side to not only win but fire them into the Final of 2XI Plate.

It was definitely a thrilling 2-1 win for Armagh deserving their well earned place in the final this week against Starthearn School in Belfast.