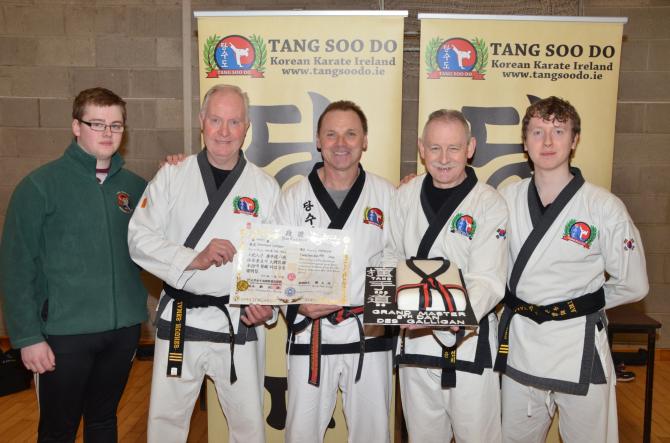 The 54-year-old is a world famous martial artist and took up karate when he was the age of 16.

However after being fascinated by his hero Chuck Norris growing up, the Limerick man discovered that his ‘father figure’ practiced Tang Soo Do and Galligan’s skills developed in the discipline over the years.

So much so that in November 2017, Gilligan received the highest honour in Tang Soo Do, the title of Grandmaster.
He is the first person in the whole of Ireland to obtain this title and one of only a tiny minority worldwide. On top of that he was also inducted into the discipline’s Hall of Fame.

Galligan has sacrificed much of his time to volunteer helping disadvantaged children in Limerick and returned to college for five years, earning a BA (Hons) in Applied Social Studies in Social Care.

He now works in a Special Care Unit in Limerick helping chldren from disadvantaged backgrounds.

Then, a few years ago, people in Norris’ charity organisation became aware of Galligan’s work and eventually he fulfilled a dream of meeting his hero in Las Vegas after receiving an invite in light of his volunteer work.

“I was brought into this room and there was hundreds of people waiting to get a photograph with him,” Galligan told Limerick Voice.

“He actually stopped what he was doing and came down off the podium he was on and gave me a hug.

“He knew me instantly and was so grateful for me coming over.

“I nearly cried, I couldn’t believe it.”

Galligan has since been invited to return any time and their friendship has continued with Norris sending him a yearly Christmas card.

His presence and guidance was greatly appreciated by everyone at Middletown Martial Arts club and they congratulate him for his recent successes.