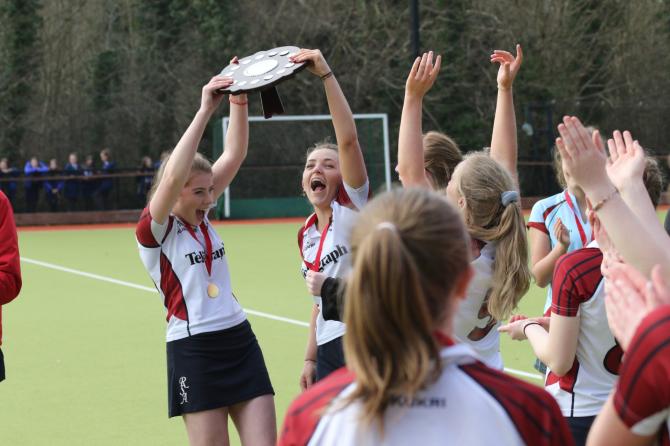 THE Royal School Armagh 2nd XI hockey team were crowned champions of the Ulster Plate after a tight victory over the keen rivals of Strathearn Grammar School.

Playing at Stormont Pavilion’s excellent facilities, Strathearn took pass back and applied pressure from the start. Great interceptions were evident from Lucy Finney and Alex Rainey, which resulted in great distributions up-field to Eliza O’Gorman who made great use of the ball. The determination paid off when Armagh got their first penalty corner, saved by Strathearn’s goal keeper.

Strathearn were eager to fight back and pushed hard on Armagh’s defence, good communication between Rachel McNiece and Aimee Rowland meant Strathearn struggled to convert. However, a sudden break away meant Armagh’s goal keeper Emma Whiteside, had to make a 1v1 save, keeping the score line 0-0.

In the second half, Armagh dominated the ball possession in Strathearn’s half, due to splendid work of Leah Graham and Karyn Nesbitt, but struggled to break their defence. Great skills were evident from Sophie Anderson and Anna Jennings who were eager to challenge the Strathearn girls. The Armagh girls won multiple penalty corners throughout the second half but swift runners of Strathearn made sure Armagh didn’t find the net. Strathearn fought back and they found themselves putting pressure on the Armagh defence and battled into the circle. When Strathearn hit the crossbar, the RSA girls knew they needed to work hard.

With minutes left on the clock Armagh won their last penalty corner, after a tense match they had to make it count. Received from Lucy Finney at the top of the circle, a skilful one-two with Anna Jennings allowed Lucy to fire the ball into the back of the net, giving Armagh the lead with minutes to go.

Strathearn were eager not to give up and drove into Armagh’s 25 pushing for a final late goal, but this was well watched and controlled by Hollie Calvin in Armagh’s defence. Pressure was extremely high when Armagh conceded a penalty corner. With the whistle already gone, these were the final touches of the game. Strathearn crowded their whole team around the top of the circle, which left no space for error from the RSA girls. After a few passes between the Strathearn girls, Armagh’s defence intercepted and with a strong sweep to the side-line, they secured themselves Ulster Plate 2018 champions.

It was certainly a superb game for both teams and Strathearn did not make it easy for the Armagh girls. Many thanks to the umpires and supporters for coming to Stormont Pavilion for the match.