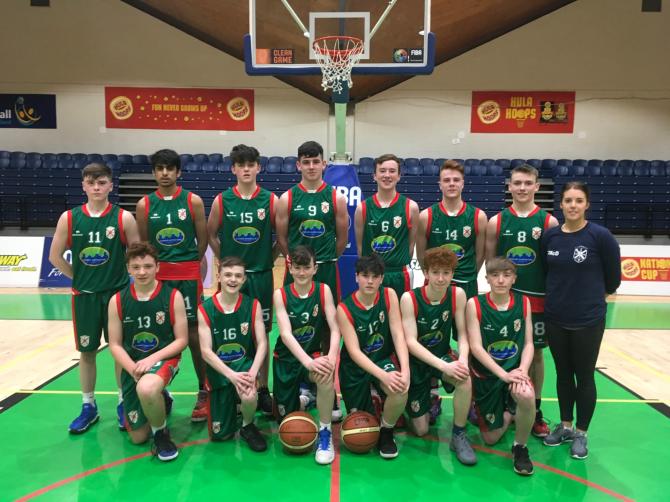 BACK in January St Patrick’s Grammar School, Armagh, Under 16 Basketball team travelled to Ballymahon, Co. Longford to compete in the All-Ireland quarter-final play offs. Having played three games, one of which went to extra-time and one that came right down to the last 90 seconds, they emerged victorious. The St Pat’s team, along with Miss McDaid their coach, had been delighted to be crowned Ulster Champions, however, qualifying for the All Ireland semi-final surpassed all expectations.

On the 2nd February the St Patrick’s team defeated Mount St Michael's Secondary School from Co. Cork, to reach the All Ireland Basketball final. They had an anxious wait for the final which was postponed due to adverse weather, however, last Thursday the team and management, along with plenty of St Pat’s support, made their way to Ireland’s National Basketball Arena in Dublin to take on Heywood Community School from Co. Laois.  After a superb display of basketball by both teams the St Patrick’s boys emerged victorious bringing the All Ireland title back to the Armagh school.

The determination, strength and attitude shown by the students during the All Ireland Final was incredible.  Organisers and referees at the event commented on their exemplary behaviour and sportsmanship, something mentioned back at school as all Key stage three students welcomed home the team, Miss McDaid and the cup!  Well done to all involved with a special thanks to Miss McDaid for all of her hard work to support the team.