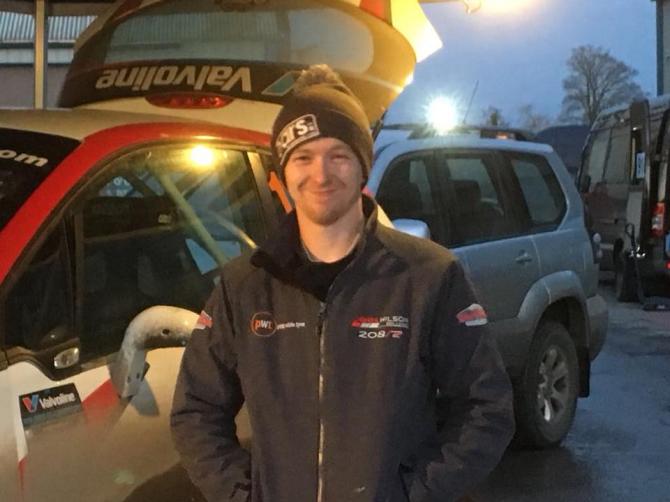 FOR James Wilson rallying has been his passion for as long as he can remember.

The 23-year-old, who lives in Keady, has been making the headlines after winning his first race in the Irish Forestry Championships last month.

But how did he get involved in the sport? Well, you can definitely say there is a strong family connection with rallying.

“My interest in rallying is definitely through family,” said James.

“My grandparents started rallying in the early 70’s and they were involved in the sport for years and years.

“They used loads of Sunbeams and a Hillman Avenger and were crowned Irish Tarmac Champions in 1981.

“From there on, my father started rallying and he won the same competition in 1991.

“He retired as soon as I was born and my uncle took over and he rallied for a long time in a couple of different cars.

“Then I arrived and it’s been in the family for three generations – it’s more of a disease than anything!”

James was first introduced to the sport at the age of 16 but admits school work was always number one.

“My first car was a Vauxhall Nova and it was a junior series that was run for drivers from the age of 12 right up to 17,” James recalls.

“I started when I was 16 in a very basic standard car with a roll cage and it was cheap way to get into the sport.

“It was a level playing field and we won that championship at the second attempt and progressed into a Peugeot 106 and I started to compete in a couple of stage rallies.

“I ended up having a big accident, managed to build up the car from scratch, and the next race the engine blew up.

“I was hot and heavy with school work and GCSE’s at that time and I had to take a break from the sport.

“In that time I made a lot of modifications on the car and spent a bit of money on it. From 2016 onwards, I’ve been back at it and I won the Northern Ireland Junior Championships.”

James’ first attempt at forestry rallying returned success as his team outshone the competition to take a sensational R2 victory on the Carrick on Suir Forest event.

Despite taking each race and event as it comes, James has targeted the British Championship as his ultimate goal.

“We have just completed our second round in the Irish Forestry Championship,” said the Keady man.

“There are six rounds in total and it’s the ideal platform for us to gain experience on gravel as our main goal is the British
Championship.

“The first round of the Irish Forestry went very well for us, we finished first in class and 14th overall out of 95 cars, so it shows the potential that our car has.

“It was a good start for us and brilliant to gain that experience, but the British Championship is the main objective.

“Realistically it is a two-year plan and any drivers who are in that class have arrived from the European Championships. There are drivers from all across the world and are very talented.

“I’m smart enough to know that it will take until the second year for us to challenge for that title. That’s due to experience but the stages don’t change that much.”

James admits his team is like a ‘family’ who have to make sacrifices to compete in the sport as they often have to spend a week away from home.

“Anyone will tell you this that’s involved in our sport – rallying relationships is like marriage as you spend so much time with your team,” he continued.

“Including me and Gavin Doherty, there are six people involved.”

At the end of March, Wilson’s second event in the Irish Forestry Championships ended in a sour note as complications with the car meant he was unable to finish.

The former City of Armagh High School pupil admits the devastation of failing to complete an event is stronger than winning a competition.

“Our first victory on the gravel was a shock and when we got back into service, we didn’t even bother looking at stage times, but we got the thumbs up to know we were doing alright,” he reflected.

“When it doesn’t go well after weeks and weeks of preparation, you take it worse than what you would celebrating a win like what happened in Limerick.

“You have to take the good with the bad. That’s the world of rallying.

“But it definitely tests you mentally as a person.”

In a sport that is difficult to finance, James is full of praise for his sponsors who help him financially to compete throughout the UK. His recent win at Carrick on Suir was also significant as he earned sponsorship with a tyre manufacturing company for the British Championships.

“It is difficult to finance the car and it’s a big commitment when you consider the level we are at now,” he stated.

“You are trying to get sponsorship all the time and thankfully we have a couple of good backers.

“Philip White tyres continuously back us and we fully appreciate their support.

“For the British Championships, we have secured a sponsorship with a tyre manufacturing company and we will run their tyres to see how they cope in the conditions.”

A lot has been made about the safety of rally drivers as they often risk life and death, but for James, it is simply focusing on the task at hand.

“If you think about the risks of anything like that then you probably won’t get too far,” he said.

“The pace out there is very fast, especially with the new cars and the high level of technology out there.

“This includes tyres, I know they are round, black and made of rubber, but when you are doing anywhere from 60mph to 100mph, they have to keep you on the road.

“When you get the helmet and gloves on, you don’t think about the risks and the light switch goes on.

“Once your co-driver calls notes, you find a rhythm and you take it from there.”

After his debut win in the Irish Forestry Championships, the spotlight was on whether or not James could hit those heights again in Limerick.

Ultimately, he didn’t manage to deliver, but the likeable Keady man hopes to learn from that experience and manage expectations.

“I put myself under more pressure than I should be doing.

“I might be trying to achieve too many goals too soon. The most important thing in a rally car is to seek time and experience.

“After getting the first win I was putting myself under more pressure to keep that going.

“You see yourself walking around service areas that people are taking notice of you.”

James recites driving a four wheel car as the ultimate rallying dream, but knows he will have to strike it lucky with a possible investor.

“The ultimate goal is to try and end up in a four wheel drive car,” he added.

“You could go and do the Irish Tarmac Rally to try and achieve the outright victory.

“If you had the budget you could try the British Championship, but it is a massive commitment.

Rallying is a hobby for James, who works as an engineer for the family business, but he has seen many other drivers become too fascinated with the sport and end up in financial difficulties.

“Realistically you have to keep in mind that rallying is your hobby,” Wilson continued.

“It’s very very easy to get sucked in and if you win a rally, it’s very addictive.

“You have to look after yourself and not get too crazy. A few boys have done that and ended up being bankrupt.

“If you play your cards right and the right support came along, it’s achievable.

“I’m an engineer in the family business manufacturing oil tankers.

“At the minute, we are very busy and we have a very good and reliable reputation throughout the UK.”

With the uncertainties of Brexit and the potential of a hard border between Northern Ireland and the Republic, James hopes
common sense can prevail which will allow travel to rally events to made smoother.

“I remember my dad and grandparents telling me that when there was a hard border, preparing for a rally was a job in itself,” he said.

“You had to have a full list of everything that was in the van.

“Now we don’t know what is going to happen, but I remain hopeful that everything will work out for the best.”

“Kris Meeke is my inspiration now and whilst things might not be going his way recently, he’s in the same scenario as all of us as he built his way up through the ranks.

“He is a World Championship driver for Citreon, so you have to look up to someone like that.

“Before him everyone loves Colin McRae, so between them two it is a tough one.”

Whilst most of the spotlight is on the specifications of the car, Wilson argues that a driver’s personal fitness can give them the upper hand in events.

“Before the season started, I was spending three or four nights in the gym with a personal trainer,” he concluded.

“Physical fitness is key and I know people not involved with rallying just think you’re sitting there, but it’s very demanding.

“When you’re fighting with the car from 60 to 100mph it takes a lot of energy and the second you get tired, your mental concentration goes and the co-driver calling pace notes might as well not be beside you.”