Hard day at the office for Mall men 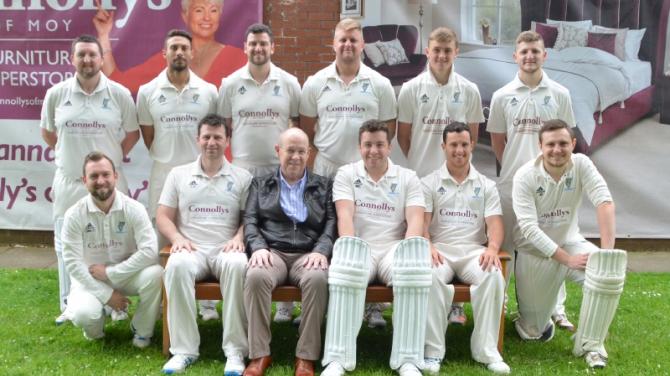 ARMAGH  welcomed Balbriggan to The Mall in their ever first Irish senior Cup match.

Balbriggan won the toss and elected to bowl on a glorious sunny day in Armagh. Openers Neil Gelston and Jamie Rogers looked comfortable against the pace attack of the North Dublin side.

Rogers was first to go, Steenson joined Gelston as they both tried to reset the innings. Gelston was playing the holding role as Armagh lost quick wickets. Colin Russell looked in great from as he managed to score freely on home turf.

The Balbriggan spin attack looked to cause Armagh batsmen trouble as they took regular wickets and kept the scoring rate below par. #

Colin Russell scored a fantastic 49 not out to get Armagh to the score of 169.

After a short tea break Armagh were set defend the total on the board. Openers of Shandley Van Schalkwyk and Ben Mackey struggled to control the swing early on. P Fletcher was able to punish any loose deliveries with ease.

Captain Matthew Steenson had no shortage of options to turn to with A Whitcroft, S Lester, H Doyle, S Wilson and N Gelston all being rotated into the attack. Harry Doyle bowled with some good discipline along with Neil Gelston who was the only one that managed to pick up a wicket.

Matthew Steenson was disappointed with his side’s performance on the day.

He said: “It was a hard day at the office. We didn’t set a big enough target to defend and we also didn’t bowl with enough discipline that is needed at this level.

“We have lots to work on and I know the guys are disappointed with the result and will keep training hard to improve week on week.

“Everyone would like to thank all the support we had throughout the weekend for both games.”

Armagh CC would like to thank match day sponsors Woolseys Concrete and Terry, Peter and David Starrett for the weekend games along with ball sponsor Jimmy George.

Thanks also to John and Rosemary Doyle and Joy Steenson for their help with the weekend teas.