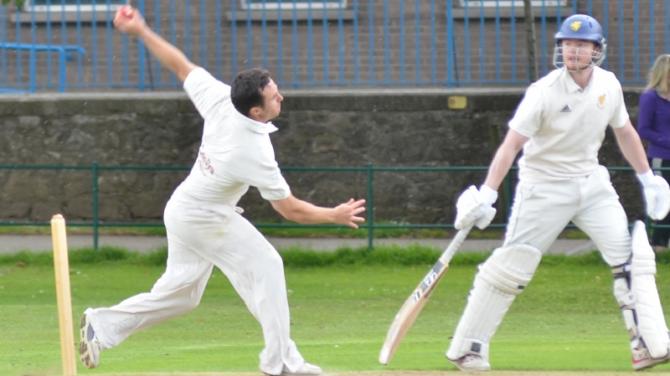 ARMAGH won the toss in this league clash with Bangor and elected to bowl.

The men from the Mall got off to a decent start but unfortunately bowled too many extras throughout their 50 overs on a difficult pitch to score on.

Ben Mackey picked up the first wicket of Nicky McCollum, then shortly afterwards the impressive Wilson picked up Burns on 40 on the board.

Gelston picked up the dangerous Khan who grafted well for 24 and accumulated runs for Bangor but at a slow rate. He was supported well in the middle overs by Karanjkar who picked up McCusker when he picked out Doyle on the square boundary.

Mark Nixon, batting at eight, was very sensible in his approach, making 32, with Mackey taking his wicket in the 44th over. He built small partnerships until near the end of the innings, well supported by McLarnon, who was dismissed by Doyle in the 50th over.

That left Armagh chasing 156 to win.

Armagh got off to a great start with Hoey and Gelston getting the score up to 25. However Gelston fell to Andrew Nixon, bowled with a low full toss.

Karanjkar and Hoey were scoring quickly and brought the score to 52. Hoey bottom edged Grossett to McLarnon for a good 28.

Armagh then collapsed from 52-1 to 66-5 when Grossett picked up Russell, Karanjkar, Wilson and Steenson in a short space of time and finished his spell with five wickets.

Boyd and Lester came to the crease and rebuilt and rotated strike well and played correctly - how a team should bat on the surface.

They brought the score to 103 when Lester fell for 18 bowled. Boyd then fell shortly afterwards for 14. Armagh's chances were severely reduced at this stage.

Doyle then fell to Khan and this followed by Mackey falling as the last wicket, leaving Armagh all out for 114.

Armagh will take plenty from this game and the team understand that application with the bat, bowling accuracy and concentration are easy fixes moving forwards. This is a very good cricket team and the squad need to believe.

Armagh entertain Cregagh in the T20 shield on Friday night and then travel to Woodvale on Saturday, June 15.