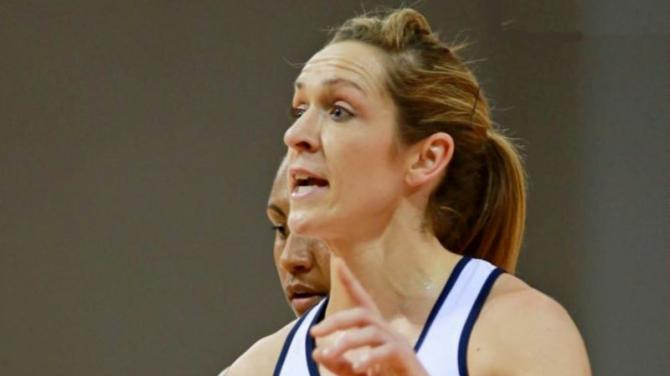 However Armagh Minors star Dearbhla Coleman's hopes of emulating O'Hanlon by appearing at a World Cup the summer she finishes school have been dashed.

O'Hanlon established herself in the Northern Ireland team at the 2003 World Cup in Jamaica but, 16 years on, towering Lurgan girl Coleman has had to settle for a place on the standby list.

Cullyhanna prospect Frances Keenan, like O'Hanlon a past pupil of Newry's Sacred Heart Grammar, is also among Northern Ireland's reserves for this summer's tournament at which they will initially play group games against world champions Australia, Sri Lanka and Zimbabwe.

Tyrone gaelic captain Neamh Woods and Antrim midfielder Michelle Magee, who each played under O'Hanlon's captaincy at last year's Commonwealth Games in Australia, are both in the squad.

Magee's older sister, former NI Under 21 captain Emma, has also lined out for the Saffrons as has English-based school-teacher Michelle Drayne, a clubmate of O'Hanlon and Woods with Lisburn-based Larkfield.

O'Hanlon is one of four survivors from the last World Cup appearance by the girls in green, when she was named Northern Ireland Player of the Tournament at Singapore 2011.

The others are O'Hanlon's vice-captain Fionnuala Toner, the versatile Lisa McCaffrey and long-serving goalkeeper Gemma Gibney, a former Northern Ireland skipper who plays gaelic football for Loughinisland at club level and was in the Down set-up earlier in her career.

Star shooter Lisa Bowman, Drayne and O'Hanlon's fellow doctor Niamh Cooper were all in the Northern Ireland squad for both the Glasgow 2014 and Gold Coast 2018 Commonwealth Games.

There are three differences from the panel of 12 on duty for the latter tournament with veteran Noleen Lennon, Scottish-based doctor Oonagh McCullough and Kyla Bowman all having opted out of international netball in the intervening period.

Craig qualifies for Northern Ireland by virtue of her mum coming from Strabane originally and the 6'2" shooter has valuable British SuperLeague experience with Team Bath.

Now 26 and working with Corrymeela in Ballycastle after a spell in New Zealand, a young Craig was on the bench for Team Bath last time they won a SuperLeague final in 2013.

She has won European Championship gold medals with England at Under 17, Under 19 and Under 21 level but the lure of playing in a World Cup has brought out her Irish roots.

O'Hanlon is one of four players from NI Premier League champions Larkfield and Craig's recent registration with Belfast Ladies brings their World Cup contingent to five.

World-class centre O'Hanlon is Northern Ireland's most capped player of all time with more than a century of appearances for her country behind her and would be playing in her fifth World Cup had the girls in green not missed out on qualifying for Auckland 2007 and Sydney 2015.

Last time round, Northern Ireland were edged out of a World Cup place by an agonising single goal loss to Scotland on a 45-44 scoreline, but this time earned their tickets at the expense of Wales.

O'Hanlon has skippered Northern Ireland to an all-time high of eighth in the world rankings, with their achievements under her captaincy including qualification for last year's Commonwealth Games and this World Cup.

She was given the honour of being official flag-bearer for the overall Team NI at last April's Gold Coast 2018 opening ceremony and led her girls in green to an eighth place finish, above both Scotland and Wales.

World-class centre O'Hanlon is a highly-influential figure for Northern Ireland netball both on and off the court and recently secured a ground-breaking five-figure sponsorship deal for the team with PricewaterhouseCoopers.

"To captain your country at a World Cup is an exceptional privilege for any sportsperson and I'm very proud to have been given the honour of leading our 'PwC Warriors' into next month's tournament in Liverpool," said O'Hanlon.

"We were delighted when we qualified way back in January last year and now, with the squad having been finalised, we're excitingly close to competition time and the final countdown is on.

"We've set a high bar by our strong results at major championships in recent years and we're all working hard under Dan's direction to give ourselves the best chance of performing well at this World Cup."

Player of the Tournament at the 2010 European Championships and also when Northern Ireland won the 2015 Nations Cup in the Far East, O'Hanlon recently won her first British SuperLeague title with Manchester Thunder.

Drayne and Toner lined out for Saracens Mavericks and London Pulse respectively in this season's competition while, along with newcomer Craig, Bowman and Cooper have some previous SuperLeague experience.

The Northern Ireland squad depart on July 3, three days after O'Hanlon's Ulster ladies gaelic final with Armagh, for training camps and warm-up matches in Manchester and Cardiff before arriving in Liverpool for the World Cup.