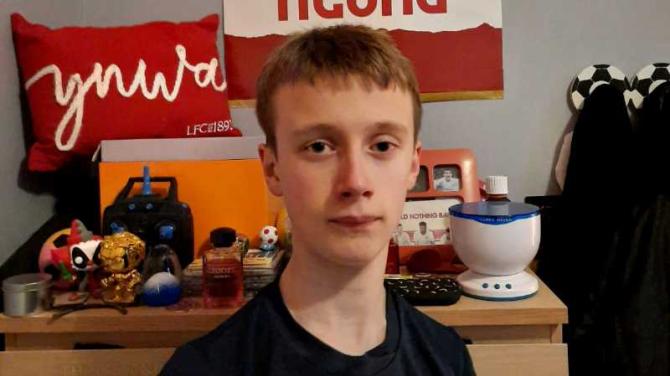 A KILMORE teenager, whose parents were told he might never walk or talk, is now starring for Northern Ireland’s Cerebral Palsy international football team.

Not only that: he is more than holding his own in table tennis against able-bodied opponents of similar age – and some adult players as well.

At the end of a year dominated by coronavirus negativity, the story of 13-year-old Jude Sheldon is an inspirational, heart-lifting one of a youngster who has defied the odds in making remarkable progress in his personal battle against adversity.

Jude, a twin, was born with cerebral palsy, a condition that affects movement and co-ordination. His twin sister, Ruby, has always looked out for him and while, like most siblings, they have occasional ‘differences’, they are a particularly close brother and sister between whom there is a very special bond.

A student at St Patrick’s Grammar School in Armagh, Jude has undergone a number of operations and attended appointments and physiotherapy work-outs from the start of his life. But contrary to that pessimistic early prognosis by doctors, repeatedly he has rubbished their expectations of him.

Having begun yoga when he was eight, he still has a one-to-one weekly session. As a result, his flexibility, core strength and focus have all improved dramatically.

Such was his progress that in January 2016 he started training with NI’s Cerebral Palsy soocer team under the tutelage of former Manchester United, Chelsea and NI full-back, Mal Donaghy. He has continued to train with the squad in Belfast ever since and has competed in a number of international tournaments against the US. Indeed, he had the distinction of scoring in his last tournament prior to lockdown.

Then watching the Special Olympics in 2017 sparked a hitherto unsuspected interest in table tennis. Enthused by what he had seen, he joined Craigavon TT Club and in next to no time he was attending training sessions twice - and sometimes thrice - a week. Given his enjoyment of the sport and the evident benefits he was getting from it, his parents invested in a TT table for the home.

During those Saturday morning and post-school sessions it became obvious that he had genuine skill combined with a passion to maximise it. Soon he was competing against able-bodied youngsters of the same age.

And prior to lockdown, he was playing in tournaments in which not only was he the youngest competitor – he was sometimes facing grown men, too. Remarkably, he never looked out of place or out of his depth.

He progressed to the Ulster Development Squad, and after training with that group in Belfast and competing in a few more tournaments he was asked to travel to Dublin to train with the Irish Paralympic Squad.

In the Connaght Open, he made the top five in the para event. He has also played in the Ulster, Munster and Leinster Open, gaining invaluable experience.

Lockdown notwithstanding, Jude continued to train, via Zoom, with the Irish Paralympic team once a week, his enthusiasm seemingly boundless. Adherence to training schedules has never been an issue, for a 9am Sunday start with the NITT squad, followed by an afternoon football session has never fazed him.

“I get tired sometimes,” he admitted. “But I really enjoy what I’m doing.”

Football, however, is his first-love which is perhaps not surprising given that he is a member of a Liverpool-daft household. Dad Simon – a Scouser born and bred with the accent to prove it - mum Marita and twin sister Ruby are all dyed-in-the-wool Reds. Like father, like son, then, for Jude’s support of the Anfield aces is borderline obsessional! And on the occasions when he has been fortunate enough to accompany his dad to the Liverpool 4 home of the Jungan Klopp-coached champions, he has seen them win each time by four or more goals.

He has met Joel Matip, James Milner and now-departed Dejan Lovran - and even bumped into Virgil van Dijk in London.

His favourite Kop hero, however, is England right back Trent Alexander-Arnold, the king of assists and dead ball exponent whose ability to cross a football on the run continues to defy the laws of physics, maths and logic.

Nor is Jude’s acknowledgement of sports celebrities confined to footballers, for he ‘follows’ Para TT player Will Bayley, whose other claims to fame include having appeared on ‘Strictly Come Dancing’.

“I was lucky enough to have a call with him for over an hour. That was organised by the Irish Para coaches,” Jude explained.

His gratitude to those who have helped him thus far in both sports marks him out as a highly appreciative young man. He lists, “The NI CP soccer staff, Stevie, Mal Donaghy, everybody at Craigavon TT Club and the Para coaches in Dublin,” as having offered great encouragement and always having been willing to give their time and share their expertise.

Does he have a particular sporting ambition of his own? His instant reply: “I’d love to play at Anfield.”

And asked if there are there any words of encouragement he would offer to others in a situation like his, he answered, “If you want to try playing something, just give it a go; you might be really good - but you’ll never know if you don’t try.”