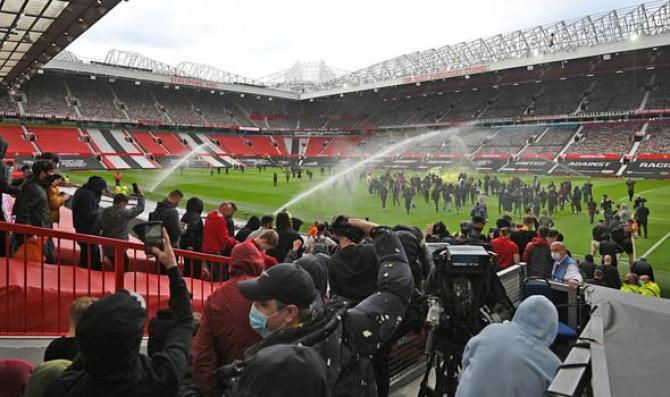 Unfortunately, United lost to their traditional rivals at home for the first time in the Jurgen Klopp era and suddenly Liverpool are favourites for a top four place after all.

Although this columnist has previously confessed to not being a diehard football fan, my allegiance such as it is in terms of the English top flight lies with the Red Devils.

However, in this case, one welcomes United’s failure to benefit from this fixture for it should have been forfeited anyway when the original game wasn’t able to go ahead.

Those scenes inside Old Trafford were completely unacceptable and a damning indictment of inadequate stadium security as well as the rampaging mobs who forced their way in.

Fan frustration at the tenure of the club’s American owners may be understandable, but that’s no excuse for criminal behaviour or stopping a Premier League game going ahead.

Never mind the three points being awarded to Liverpool, a case could be made that Manchester United should have been suffered further deductions due to what happened.

Whether that penalty should have been severe enough to jeopardise their qualification for the Champions League is debateable, but it would at least have sent out a statement.

The counter argument is that such sanctions disproportionately punish players and law-abiding fans, but actions should have consequences even if there is collateral damage.

Clubs can’t reasonably be held accountable for what happens outside stadiums but inside is a different matter and, at that level, there is no excuse for not hiring sufficient security.

Widening the debate beyond the current protests, there should be zero tolerance of hooliganism, whether attacking fans from other teams or just wanton destruction of property.

The same applies to racist conduct, including by players towards opponents, which if proven should result in the player directly losing their job as would happen in other walks of life.

Two weekends ago we saw a boycott by many sportspeople and sporting organisations in protest against racism, other online abuse and the failure of social media platforms to act.

Two organisations your columnist sits on the boards of, Sport NI and Netball NI, took part in the initiative and naturally nobody could object to the important message being sent out.

It was good to see such solidarity across the sporting spectrum but one suspects the temporary pause in posting official content, however well-meaning, will have little effect.

Clearly the big blackout was aimed at sending a message to the giant social media companies rather than the moronic scum involved in this despicable behaviour.

However, with everything returning to normal after a few days, the brief boycott could amount to little more than vacuous virtue-signalling if not backed by real action.

Rather than just not posting content for a few days, sporting organisations should display anti-racist slogans and demands to clean up social media prominently on their platforms.

Racism and abusive behaviour are obviously problematic in real life too, but let’s focus for a moment on the online world where it is presently far too easy for hate to flourish.

What began with fan forums and messageboards as the internet started to flourish has spread into the more modern phenomenon of social media, which has become a cesspit.

Free speech is important but civilised standards of engagement must be laid down and enforced with culprits purged and able to be held legally accountable in serious cases.

Having had a newspaper platform for most of my adult life, this writer is in a privileged position and acknowledges social media has broadened debate to the previously voiceless.

But with rights should come responsibility and at least those who contribute to mainstream media as columnists must put our own name to the strong opinions which we hold.

Some may wish to remain anonymous online for good reasons, while providing views which have merit, but being forced to register using their real identity would strike the right balance.

Clearly racism is particularly abhorrent but, as someone who has been a passionate advocate for female sport over many years, it is frustrating to see sexism so rife too.

There is nothing more pathetic than emotionally and intellectually inadequate individuals disrespecting sportswomen whose boots these worthless wastes of space couldn’t lace.

Some of these thick idiots don’t understand the irony of, for example, posting comments below female sports stories on The 42 website claiming that ‘nobody cares’.

Amusing stupidity is one thing but there’s also much more malign misogyny and, although such comments are often deleted on websites, social media by contrast is just a jungle.