Tommy all set to retire at the end of the season 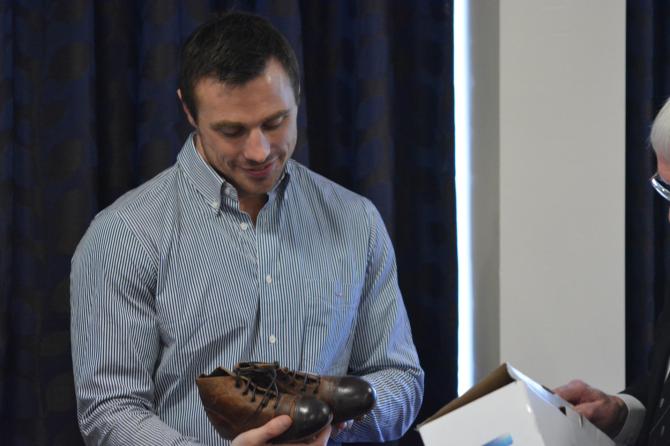 Tommy Bowe receives a special presentation at the City of Armagh RFC, during one of many welcome visits to the Palace Grounds by the former Royal School Armagh student.

AFTER  69 caps for Ireland and 163 appearances for Ulster, former Royal School Armagh pupil Tommy Bowe has announced he will retire from the sport at the end of the season after an impressive 15-year career.

The 33-year-old has suffered numerous injuries in recent years with a current shoulder problem meaning the wing will not make Ireland’s Six Nations squad next month. Bowe announced his retirement with a poem he shared on Twitter.

“I’ve spent most of my career in Belfast.
“At first George said I wasn’t very fast.
“I eventually found my gears.
“Had some incredible years.
“But it’s time to tell you – this is my last!”

Bowe will be fondly remembered for his try against Wales in 2009 that helped Ireland win the Grand Slam and the Monaghan man scored over 150 points for his country.

A career highlight arrived when he was named Six Nations Player of the Championship in 2010 and he was a member of the British and Irish Lions squad in 2009 and 2013, starting five Tests including all three during his first series against South Africa.

Bowe made his competitive debut for Ulster against Connacht in April 2004 and scored on his debut, in the first of two spells with the Province.

Unfortunately, serious injuries have curtailed Bowe’s appearances for club and country in recent years, but he will still go down as one of the best wings of his generation.

Outside of the sport, Bowe has appeared on numerous shows with the BBC and RTE, as well as becoming a father for the first time after the birth of his daughter Emma.

“The Grand Slam in 2009 is something that I will cherish forever and his contribution to that success was immense,” Kiss said.

“He has consistently produced on the biggest stages and that was perhaps most apparent in his appearances for the British and Irish Lions.

“For Ulster, Tommy has been an absolutely outstanding servant. He has been one of the go-to players in the team since his debut back in 2004, scoring tries and playing well on a consistent basis.

“His tremendous leadership attributes have been a massive help to the playing group, while he has selflessly mentored some of the younger players in our system.

“He has fought back from a number of long-term injuries, particularly in recent seasons, and that is testament to his strength of character.

“Tommy is a pleasure to work with and he’ll be missed next year, for sure. However, we have a big few months ahead and I know that he will be focused on making those as successful as possible.”