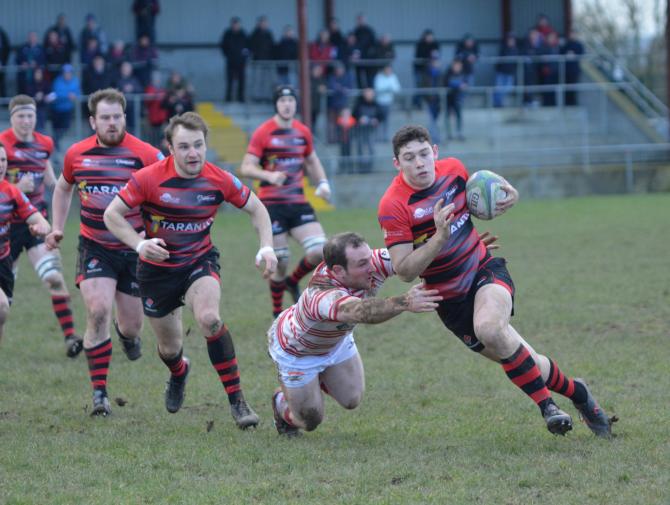 Armagh's Evin Crommie rounds his opposite number early in the first half.

CITY  of Armagh maintained their push for a promotion playoff position in Division 2A when they scored a bonus point victory on Saturday away at third placed Nenagh Ormond.

The reverse fixture at the Palace Grounds had been a high scoring 70-point encounter and this match was to follow a similar pattern.

Armagh started off brightly and Ryan Purvis kicked a penalty on four minutes to open the visitor’s account. Indiscipline then let Nenagh full back Clayton Stewart convert two penalties and the home side now led 6-3 at the end of the first quarter.

Armagh were keen to spread the ball at every opportunity and this ambition was rewarded with a try on 19 minutes scored by second row, Peter Starrett. The conversion was unsuccessful but the visitors had edged ahead 6-8.

Despite losing their previous two matches, Nenagh always looked threatening and the Tipperary side took the lead with a well-worked try following turnover ball on halfway. Jamie McCarry touched down for Stewart to convert and Nenagh were ahead 13-8. A penalty from Stewart edged Nenagh further ahead 16-8 before Armagh were back in the match with their second try. Back row stalwart James Morton finally broke through the determined Nenagh defence to touch down for Purvis to convert.

As half time approached, Nenagh held a one point lead 16-15, but the visitors conceded yet another penalty for a ruck offense on the stroke of halftime to turnaround 19-15 in arrears at the break.

City of Armagh started the second half with a bang and scored two tries in an eight minute spell.

First over the tryline was centre and team captain, Chris Colvin who burst through just to the left of the posts for Purvis to convert. The second score went to winger, Andrew Willis who had just come off the bench and he secured Armagh’s bonus point try with a typical barn-storming run.

With this 14 point burst, the match had swung in favour of the Orchard County team who now led 19-29 but Nenagh showed typical Munster spirit and scored an outstanding try from Peter Coman. This was converted by Stewart and the gap between the sides had now been reduced to 3 points, 26-29. As the evenly balanced game moved into the final quarter, Armagh attacked deep in Nenagh territory and O’Connor was sin binned for an illegal tackle on Robert Whitten. Purvis converted the penalty and Armagh had some breathing space at 26-32.

Nenagh pressed for a last gasp score but it was Armagh who completed the scoring with their fifth try of the game in the 80th minute when Chris Colvin scored his second try of the match. The successful conversion made the final score 26-39 and Nenagh were denied a losing bonus point.

This was a crucial win for City of Armagh on the road and the coaching team of David Eakin and Ali Birch were delighted with the outcome. ‘With a number of players injured, today’s squad stepped up to the mark and we scored some exceptional tries today”, commented Eakin. “With four games remaining, we will focus on each match as it comes”. Coaches Willie Faloon and Chris Parker, away on School’s Cup duty with the Royal School, echoed the terrific team performance.