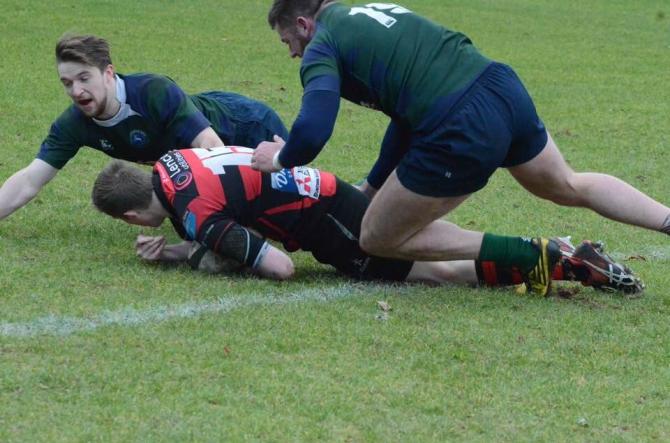 CITY  of Armagh 4XV were back in league action following defeat by a strong Ballymena 4XV in the McCambley Cup Quarter-Final the weekend previous.

The lads got off to a poor start once more when they conceded a converted try within minutes or the kick-off to give the visitors an early seven point lead.

Armagh came back almost immediately and through a good few phases and a switch play that caught the opposition out a strong run by Centre Michael O’Neill saw him score in the corner. The conversion was missed and the scores were 05-07.

Grosvenor scored their second try of the afternoon shortly after with the forwards forcing their way over from a quick tap and go penalty on the 5m line. Their conversion was missed and their lead was extended to seven points at 05-12.

Armagh were able to draw the game level through a try by Captain, David Loughran following another strong run by O’Neill. The conversion was added by Loughran and the scores were twelve a piece going in to the final ten minutes of the half.
The hosts were intent of keeping it tight until the half but disaster struck as Grosvenor got in for an unconverted try to give them a five point lead once more.

With three minutes to the half Armagh drew the game level once more with an unconverted try of their own through Fullback, Stuart Agnew who was having a stormer of a game with some powerful return running from the restarts and two try saving tackles as the last man.

The two teams went in at the interval with nothing to separate them on the scoreboard. The scores were tied at 17-17 and the scoreboard was reflective of the contest on the field, there was nothing between the two sides with all to play for in the second half. The small crowd were in for an entertaining final forty minutes.

The second half proved to be a cagier affair and it was Armagh who drew first blood when their number ten, Jeffrey Dougan showed the entire Grosvenor defence a clean pair of heels as he ghosted through their defence to touch down. The conversion attempt was missed by Loughran who was having an inconsistent day off the tee. Nevertheless Armagh now lead the game for the first time at 22-17.

Unlike the first half Armagh were able to hold on to their lead for considerably longer, indeed they had chances to extend it with Adam Hume and Andrew Pogue both deemed to have been held up upon crossing the line.

The deadly Armagh pack was causing some serious bother with the returning Jude Parr showing no signs that this was his first Rugby game in three years. His menacing runs were thwarting the Grosvenor defence again and again and gaining Armagh some great territory in the process.

Grosvenor did cross for their bonus point try that was converted to regain the lead with some ten minutes of the game remaining and it was now all or nothing for this Armagh side we’re they to get out of the current rut they found themselves in and return to winning ways.

The lads responded superbly and a second try of the day for Dougan was enough to secure the win. A couple of neat carries by the forwards, Robert Nicholl and Paul Cully set the backs up well and instead of using them Jeffrey chose to go himself. He spotted the gap and went for it and right he was scoring under the posts. The try was converted by Loughran and Armagh now had a 29-24 with minutes of the game remaining.

Armagh held out to record their first win in the Premier League gaining a valuable bonus point in the process. They have a run of three home games looming and if they can manage to win them they should see themselves in contention for league honours. Next up we welcome Academy 3’s to the Palace Grounds on Saturday.