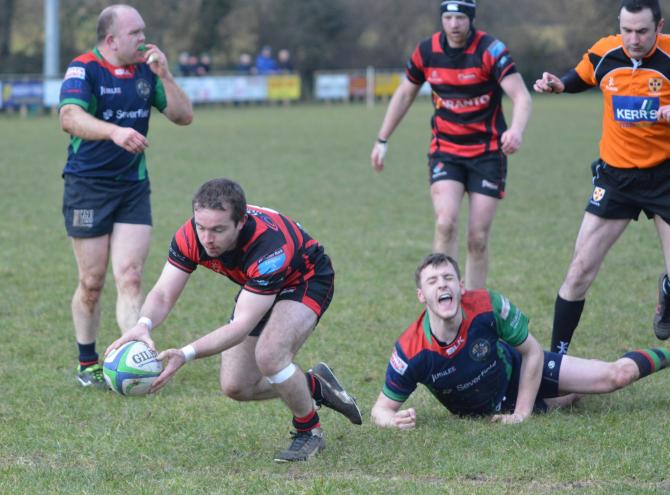 Armagh prove to be too strong for Omagh at the weekend.

CITY  of Armagh’s second XV warmed up for their crucial semi-final match in the Towns’ Cup with a comprehensive victory over a gallant Omagh second XV in a Second XV league match last Saturday.

In ideal conditions, the game started well for Armagh with full back, Kyle Faloon showing his pace to score after 2 minutes. Shortly afterwards a sweeping move with backs and forwards combining, enabled winger, Shane McKeever to stroll over for a converted try. Armagh looked threatening on every occasion they got the ball and good counter attacking set up several opportunities. Unfortunately these chances were butchered according to coach, Willie Faloon who was demanding a more clinical approach to the game. The team’s rhythm was disrupted with several pauses for injuries and both Armagh subs had to take the field before half time. On 36 minutes, prop, Paul Mullan barged over for another try converted by Boyd, to leave the score 19-0 at halftime in Armagh’s favour.

The second half commenced with Armagh continuing to dominate and Shane McKeever went in for his second try after great handling by the backs. On 50 minutes flanker Gareth McNeice was sent to the sinbin for advising the referee how to referee. Centre John Faloon then had to move into the back row for the remainder of the game and he showed great determination to go in for another converted score.

Paul Mullan then went in for his second try, not to be outshone by his former under 18 team mate McKeever in getting a brace of scores. Winger William Holden then got into the act with a well worked try to put Armagh 43-0 up. Omagh didn’t give up though and stout defence by the home forwards prevented a consolation score for the visitors. As the match came to a close, Pau Gimero-Alvarez ran from his own 22 beating several defenders to dive over to complete the scoring and the final score was 48-0 to the home team.

Coaches Willie Faloon and Chris Parker, still on cloud nine following the sensational win by the Royal School in mid-week, were full of praise for the Seconds’ side, but they will have to be on their game when they face Ballyclare in the Town’s Cup.
Prior to that match, City of Armagh 1st XV are in action on Thursday night at the Palace Grounds against Banbridge in the SONI Ulster Premiership.

Tandragee 100 organiser Anne to be honoured for her voluntary work

A screengrab from the video posted online by SDLP Newry and Armagh MLA Justin McNulty.