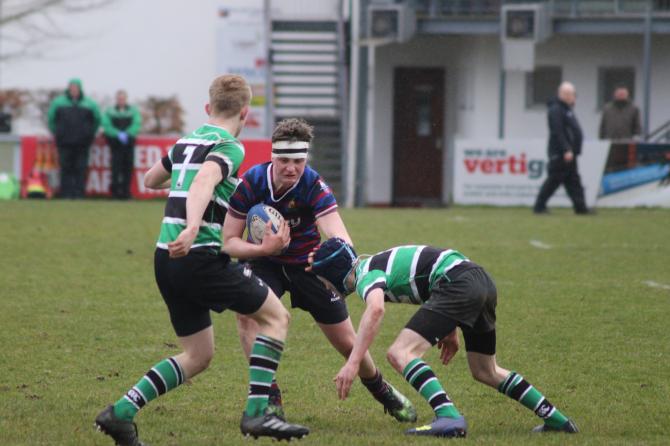 Royal School, Armagh's Dylan Poyntz tries to get through the Sullivan Upper defence.

ON  Thursday the 8th of March, the Medallion Plate Final took place between The Royal School Armagh and Sullivan Upper High School, hosted by Belfast Harlequins. The game attracted a generous crowd made up of pupils, staff, parents and friends of both sides. The game got underway with both sides showing signs of tension and anxiousness.

In the first few minutes, there was some good rugby played by Sullivan, the defending champions, but with resilient defence Armagh were able to win a penalty and opted for a shot at goal. James Allen stepped up and got the scoreboard rolling which released some pressure off the Armagh men, 3-0.

Following this there was a period of sustained pressure from the Armagh boys. This pressure led to a five-metre lineout and a maul was set. A great drive from the pack aided by atmosphere from the Armagh supporters pushed Joshua Cunningham over for the try, 8-0 at halftime.

Going into the second half with a slender lead, Armagh had the wind at their backs and confidence to win the game. With the first phase of the second half, replacement Matthew Thomas-Smith put a huge tackle placing Sullivan under pressure. This led to Ross Taylor stealing the ball and quickly passing it out to Matthew Monaghan on the wing for a try in the corner, 13-0.

The momentum was now with the Royal School. Another five-metre lineout was taken very well by Matthew Strain and a great shove by the forward pack got them over the line for Joshua Cunningham to score his team’s second maul try to make it 18-0.

Soon afterwards, the Sullivan team started to create some try scoring opportunities but were unable to convert these opportunities, as the Armagh Defence was effective. To put the icing on the cake, an Armagh scrum inside the Sullivan 22m line resulted in the backline crossing the whitewash through a well worked move by Matthew Tomas Smith. James Allen added the conversion.

The Medallion Squad would like to thank all the supporters who attended the final.