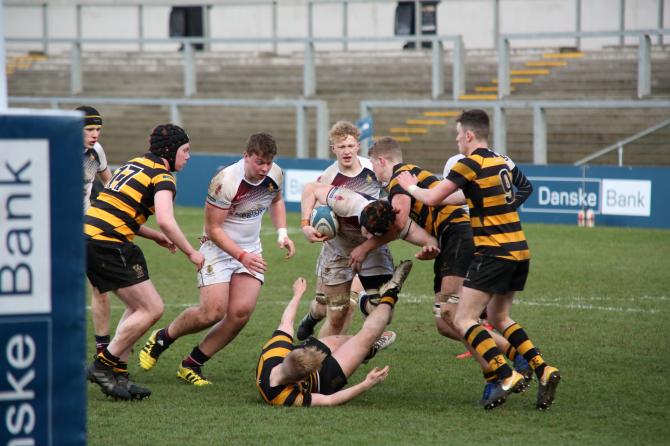 ROYAL School Armagh will hope to lift their first Schools’ Cup title in 14 years as they take on Campbell College in the showpiece decider on March 19.

It was back in 2004 that the school last tasted success in the competition and who did they beat on that occasion? Yes, Campbell College.

The Royal School have a rich pedigree in the Challenge Cup, nine-time winners, but what would it mean to land the coveted trophy once more?

"We are very excited and it was our aim at the start of the year to reach the final,” Treanor said.

"We are looking forward to it and I can't wait to get back playing again.”

Despite going into the game as the underdogs, Armagh halted RABI’s chances of winning four Schools’ Cup titles in a row and Treanor insists the camp was ‘confident’ going into the semi-final.

"We knew that RBAI were going to be tough to beat, but we always remained confident we could do it,” Treanor added.

"I'm just glad we got it done.

"It's been a privilege to captain this squad as there are a lot of leaders in our team and my job has been easy.”

The Monaghan man helped himself to a try in the first-half, but stressed that the victory was the sweetest part of the semi-final success.

"It was a dream come true getting a try at the Kingspan Stadium, but the most important thing was getting the win,” Treanor continued.

"We've got a bit of doggedness, us country boys. We won't let them by us.

"Campbell have a very big pack and they'll look to dominate the set pieces and run over the top of us, but hopefully our defence will be strong.”

Willie Faloon, the Royal School Armagh coach, who was a member of the 2004 Schools’ Cup winning side for the Royal, admitted he was ‘emotional’ after watching his team secure a win against RBAI.

"We said earlier on this season that we'd like to get to the final and thankfully we've got another day out," said a relieved Faloon.

"I think I was probably more emotional there than when I actually won it as I think it all breezed over me that day.

"It's fantastic for the boys, they deserve it, they've done all the work and I'm just so happy for them, and the real emotion (I have) is for them."

With RBAI going close at the end to securing a fighting comeback, the Armagh defence held firm much to Faloon’s relief.

“I thought with ten minutes to go we were comfortable enough, we had an opportunity to kick for the poles but it was too far out so we kept the pressure on,” Faloon continued.

“By the end I’d experienced every emotion under the sun, there was one stage we had a turnover and I would have kicked it out but our boys decided to try and score!

“Inst aren’t a team that’ll just let you win and fair play to them, they stuck it to us all day.”