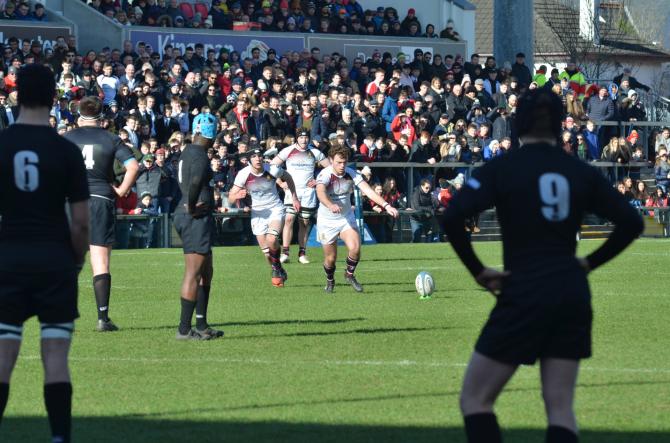 CAMPBELL College have broken Royal School, Armagh hearts as the Belfast outfit lifted the Danske Bank Schools’ Cup after a thrilling final at the Kingspan Stadium on Monday afternoon.

The East Belfast college ran out 19-13 winners but they were made to fight every step of the way for their victory.

The Royal had overcome RBAI in the semi-final and had already beaten Campbell earlier in the year therefore they approached the final with plenty of confidence. However it was the Belfast side who would cause a bit of an upset by running in three tries.
The Belfast side defended resolutely throughout and Armagh struggled to find their rhythm with some uncharacteristic errors being forced.

Armagh coach Willie Faloon had said in the run-up to the final that whichever team settled best with the big-game nerves would go on to win. And in the early exchanges it looked like Campbell were drawing on their past final experiences.

Armagh had the first scoring opportunity on 17 minutes but Thompson’s penalty, after a high hit on Matthew Reaney, fell wide.

On the stroke of half-time Campbell recorded their first score of the game when their scrum-half Gaskin went over after powerful work from the forward. The conversion was missed.

A surging run from Matthew Reaney from the re-start led to an Armagh penalty after he was hauled down. Zac Thompson made no mistake with his kick to leave the scores 5-3.

Armagh were beginning to turn the screw with Reaney at the heart of all that was good for the locals. However Campbell registered another try somewhat against the run of play. The try was converted as Campbell put some daylight between the
teams at 12-3.

Another Thompson penalty kept Armagh ticking over on the scoreboard and staying within touching distance of their opponents.

Campbell were able to put Armagh under some pressure and turned this possession into another try – something Armagh were struggling to do throughout the afternoon. The conversion made it a long way for Armagh to come back.

However Armagh’s never-say-die attitude saw them register their first try of the game right at the death when Alex Johnston went over and Thompson converted to leave the final score 19-13. The Armagh score was brilliantly done by Johnston, who cut a brilliant line down the wing and then juked inside past several tackles to go over under the posts under pressure.