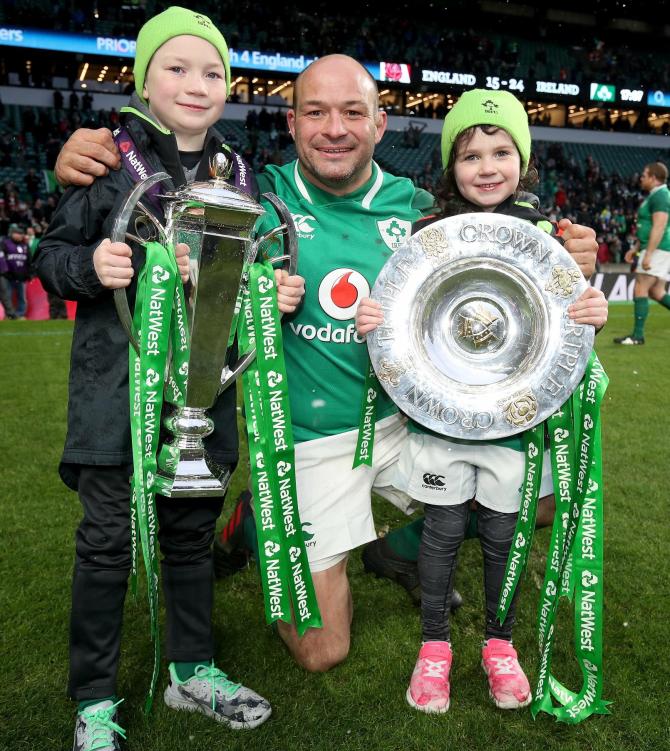 Rory Best pictured after the final whistle at Twickenham with his children, Penny and Ben

RELAND captain Rory Best has declared leading his men in green to their glorious Grand Slam on St Patrick’s Day as the highlight of his record-breaking rugby career.

The 35-year-old from Poyntzpass became only the third man in Irish history to skipper the national team to a Championship clean sweep, which was completed by a wonderful win at Twickenham on Saturday.

Front row warrior Rory had warned ahead of the match that Ireland would need to save their best until last to overcome England in their formidable fortress and they duly delivered a superb performance in winning 24-15. It was a thoroughly deserved victory and, if anything, the scoreline flattered a well-beaten English side who had won the title themselves in each of the past two seasons but have ended up fifth in this spring’s Nat West Six Nations table.

Before the Championship started, this Twickenham clash had been billed as a likely Grand Slam showdown, but English losses away to Scotland and France tore up that script. With all the other teams having lost at least two of their first four games it meant Ireland being confirmed champions for a third time in five seasons under Kiwi coach Joe Schmidt with the last round of fixtures still to come.

But Best, one of only two survivors from Ireland’s last Grand Slam of 2009, which had ended a wait of 61 years, admitted that being presented with the Six Nations trophy on the back of a defeat would have been a huge anti-climax. That had happened England in the corresponding game last year when they arrived in Dublin with the title wrapped up and came away with the trophy but a sense of what might have been after Ireland pooped their intended Grand Slam party.

On Saturday, Ireland were up against an English side which hadn’t lost a home match in the Championship since 2012 or been beaten at Twickenham under current coach Eddie Jones, so Best was under no illusions about the tough task facing his side.
But Ireland laid the foundations for victory during a near-perfect first half as they established an interval lead of 21-5 which was surely beyond their wildest dreams and thereafter they fought hard to deny England a way back. Ireland were efficient, ferocious and disciplined against an English side who were beaten at the breakdown and gave away far too many penalties, but this was also a highly impressive peformance full of ambition, invention and smart, ruthless rugby from the visitors.

Fittingly for St Patrick’s Day, perhaps the men in green got a few breaks but they earned everything which went their way rather than just relying on the notional luck of the Irish, and the job was done by the time England crossed for a consolation try with the clock red.

Joined on the pitch by his children at the final whistle, an emotional Best declared himself ‘massively proud’ as he reflected on the achievement and one of the greatest Ireland displays of all time. “Words can’t describe how delighted we are. We knew it would be a really tough task today and we tried to attack England with and without the ball right from the off. We wanted to make every single moment count, to try and build as close to the perfect 80 minutes as possible,” revealed Rory.

“It was a ferocious Test match but we knew the reward would be worth every ounce of effort required. I’m massively proud of this team and must give great credit not just to the 23 guys on duty today but the 30-odd players who have been involved during this campaign.”

Reflecting on a campaign almost derailed by a late French try in Paris at the start of February before Sexton’s stunning strike, Best spoke of how Ireland’s determination and hard work were eventually rewarded with unforgettable glory. “I think we knew that we had to target the first game and then go one game at a time after that. You look at the fine margins and how we looked dead and buried in Paris having controlled a game that we should have already won. Those are the little moments.
“It’s reflective of how much we know the effort that went in and how special that kick from Johnny was. We wanted to ensure that magic moments like that don’t go unrewarded and our ultimate reward has come this afternoon,” reflected Rory. Best became the first Ulsterman to lead Ireland to Grand Slam glory and, although he had made a significant contribution to the 2009 success under Brian O’Driscoll with one start and four appearances off the bench, this triumph meant the world to the teak-tough hooker.

“Every kid grows up dreaming of playing for Ireland and when you do that the next thing you want is to win something with Ireland. To captain your country is an honour but to captain the team to a Grand Slam in that special green jersey is something dreams are made of,” Best enthused.

“It’s the biggest highlight of my career. I know a lot of teams say it if they do well or win games but this bunch of players and management is special. We’re a really tight group and to do it with them is just great.”

Ireland’s third most capped player of all-time with 111 Test appearances, Best has now won two Grand Slams and four Six Nations titles as a player and Saturday’s success enhances his standing as an exceptionally successful captain. Before following fellow hooker Karl Mullen, from 1948, and superstar O’Driscoll as a Grand Slam skipper, Best had already led Ireland to a first-ever victory over New Zealand and a historic hat-trick of wins over the southern hemisphere big three in the same calendar year.