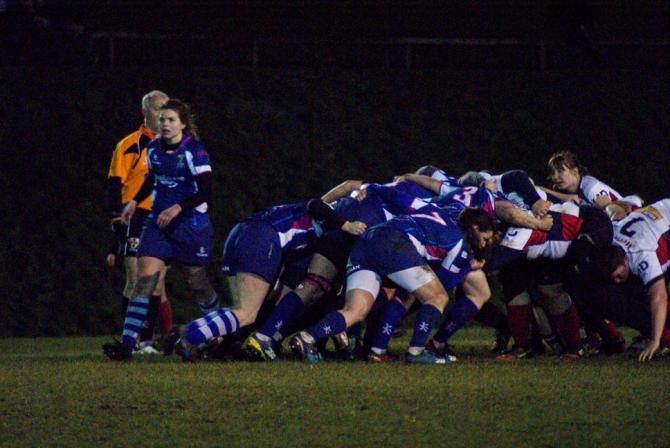 Action from Portadown/Dungannon Ladies victory over Malone in the Regenerate Cup.

THE  Bluebirds hosted the first round of the Regenerate Cup on Friday night and it had the potential to be a very exciting game. Both teams were ready to do battle as the week long postponement due to the snow made the girls anxious to get the show on the road.

It had been six weeks since the last match and the Bluebirds got off to a rusty start. Between knock ons and the ball being ripped from our possession this soon shook the girls up and their game experience promptly kicked in. the home side built pressure, accumulated phases and it wasn't long before Portadown player Caroline Meenan crossed the try line giving the Bluebirds a 5-0 lead.

The next phase of the match was pretty stop/start as a few of the girls from both teams went down on the pitch at different times which interfered with the flow of the game. The next score arrived from Bluebirds no.10 Hannah Rodgers, 10-0.

Once the game gained some fluidity the joint team really found their stride. From building phases to gaining ground, this enabled the Bluebirds to put pressure on the Malone girls into conceding several more tries.

The tries were scored by Cheryl McWilliams, Sinead McMahon, Ciara Lynn and Kirsty Jackson, with Lynn kicking a conversion.

The teamwork between the Bluebirds was great to watch and although our penalty count started to rise, Malone were unable to turn them into points.

The final score ended up 32-0 to the Bluebirds!

All the girls had a really good game but our player of the match was awarded to Portadown's Kirsty Jackson. Congratulations.
Overhearing spectators at the side line was very humbling on Friday night. Seasoned male players of the sport were remarking how entertaining the match was and how they enjoyed watching the girls play rugby - times are changing!

On behalf of Portadown Ladies Rugby team we would like to thank both Dungannon and Malone women's teams for helping reschedule our cup match fixture.

The Bluebirds have been drawn to face Randalstown in the semi-final of the competition.