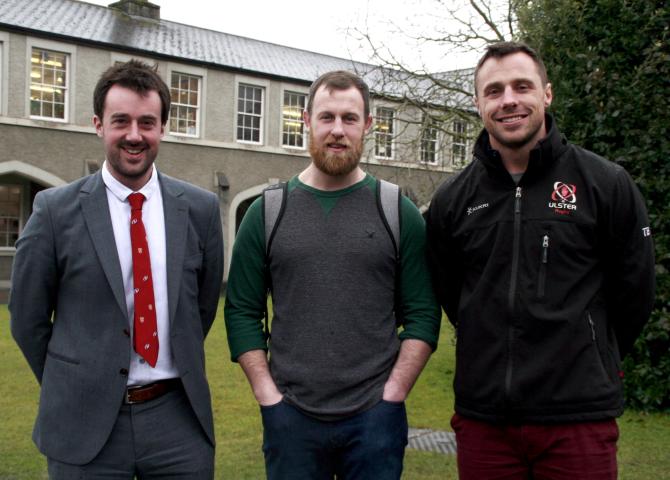 The Royal School, Armagh rugby coaches, Chris Parker and Willie Faloon with Ulster and Ireland rugby star, Tommy Bowe who popped into the school last week to wish them all the best.

HE might have won 69 caps for Ireland, played on two British and Irish Lions tours and collected silverware at club level, but rugby star Tommy Bowe admits not playing in a Schools’ Cup final fills him with regret.

The 34-year-old visited the Royal School last week to pass on some guidance and inspiration to his former school ahead of their final against Campbell College.

The Emyvale man played in a strong Armagh side, but they never capitalised on their huge potential.

“It is still a huge disappointment not reaching a Schools’ Cup final as it’s something that I’d loved to have been a part of,” Bowe said.

“With the likes of Gareth Steenson and a couple of guys who were playing for Ireland Schools, we had a good side.

“To make it to a Schools’ Cup final is something I never managed to do as we unfortunately always seemed to be beaten in the quarter-final.

“We had the potential to go far, but we just couldn’t quite make it.

“I think that will be something I’ll look back on with some regret not winning the Schools’ Cup.”

With many of the Royal School Armagh players having aspirations to play rugby at a higher level, Bowe insists they are heading in the ‘right direction’ to fulfil their dreams.

“I think the Royal School Armagh boys are going in the right direction,” Bowe added.

“I think for Armagh to make it to the final certainly shows the quality within the squad and its about taking opportunities when they get them.

“They have done that so far and I think they should be proud of themselves.

“They have played some fantastic rugby which I’m sure if they have aspirations to play for Ulster and Ireland, they are definitely on the right track.”

Bowe announced at the start of the year that he will be retiring from rugby at the end of the season after an impressive 15-year-career in the sport.

Injuries have taken its toll on the likeable wing, but he remains focussed on challenges outside of rugby.

Bowe has appeared on numerous shows with the BBC and RTE, as well as becoming a father for the first time after the birth of his daughter Emma.

“It’s going to be a shock to the system when I hang up my boots,” Bowe concluded.

“I’ve been playing professionally for the last 15 years and it’s been a massive part of my life.

“it will be a different transition for me but I have plenty of commitments outside of rugby to keep me busy.”