Randalstown put to the sword by a dominant Armagh 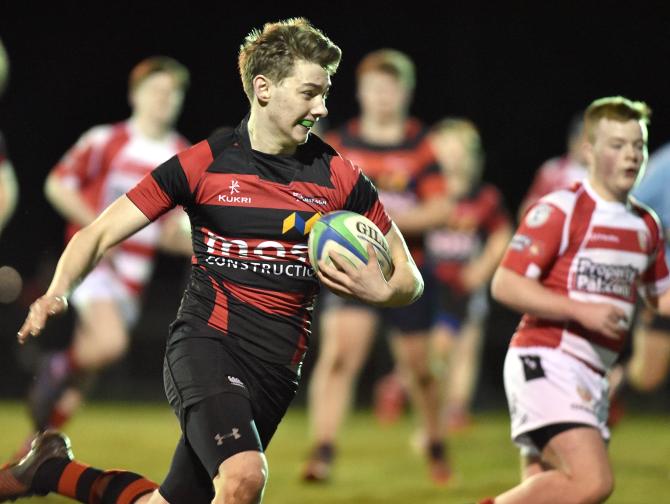 THE  third of this season’s games got underway in the Nutty Krust U18 Tournament under the floodlights at a cold but dry Chambers Park when the Armagh U18’s, the current holders of the Nutty Krust Tournament, and the Randalstown U18’s game was played on Wednesday evening. The Armagh U18 team recorded a well contested 31- 17 victory by the end of a most entertaining game. A sizeable crowd had gathered to watch an entertaining game which featured quite a few talented players on both teams. Included in the crowd were representatives of the Ulster Rugby Talent ID Department.

The Armagh team had built up a narrow 10-5 lead by the break with their points coming from an Archie McAlpine try which was converted by their very impressive centre, Shay O’Brien as well as a penalty from Shay. The Randalstown team responded with an unconverted try from Eoin McDonald who took advantage of good work from Ross Swan and Jack Williams before touching down for the try.

The second half saw both teams play an expansive game with both forwards and backs not afraid to play with their heads up. Randalstown started strongly and Matthew Luke, Eoin McDonald and Peter Cullen all combined well before releasing Stefan Lyttle who finished off the flowing attack with an unconverted try to take the score to 10-10. The Armagh team recovered and Robert Mathers, their hard working prop, combined with Timothy Henry who off loaded to David Wilson who finished with a try. Shay O’Brien added the extras to give the Armagh team a 17-10 lead. This became 24-10 when Shay O’Brien, Brandon Gribben, and Nathan Rodgers created the opportunity for Adam Magowan to finish off with a try. Once again, Shay O’Brien was successful with the conversion. Quick ruck ball was well used by the Armagh team and, four minutes later, Nathan Rodgers ran in for another Armagh try. Shay O’Brien added the conversion to give the Armagh team a 31-10 lead. Possibly the best score of the evening came close to the end of the game when Ruairi Griffith, the Randalstown centre, fielded a clearance kick on the halfway line. He set off with the ball and displayed great skill, pace and awareness before touching down for the try. Oran Gilbert hit the drop goal conversion from the touchline to leave the final score reading 31-17 in favour of the Armagh U18 team.

As usual with the Nutty Krust Tournament the players all received a post-match meal which was sponsored by Jim Hewitt Meats, prepared by the staff in “Scrummies” kitchen and organised by the ever present Sid Rowe. All players, as well as their coaches, then received a Nutty Krust loaf on departure.

Gary Jackson, a member of the Nutty Krust Tournament organising committee, then presented the impressive Armagh No 12, Shay O’Brien, with the Nutty Krust “Man of the Match Award” at the post match ceremony.

The last of the Nutty Krust Tournament 2018 Round 1 games will take place on Wednesday 28th March under the Chambers Park floodlights when Rainey RFC U18’s will play Malone RFC U18’s at 7-45pm. The Armagh U18 team will await the outcome of this game before they will know who they will play in the second semi-final of the 2018 Nutty Krust Tournament on Wednesday 11th April. All supporters will be made to feel very welcome at this and any of the remaining 2018 Nutty Krust games.