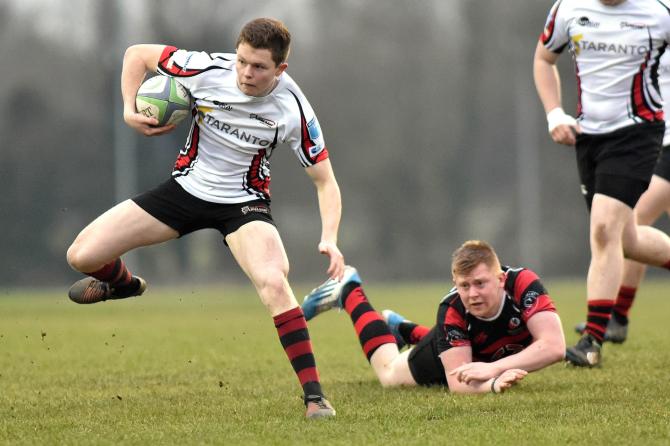 THE  second of this season’s semi-final games got underway in the Nutty Krust U18 Tournament under the floodlights at a cold but dry Chambers Park when the Armagh U18’s and the Rainey U18’s game was played on Wednesday evening. The Armagh U18 team recorded a well contested but comfortable 30-14 victory after a most entertaining game. A sizeable crowd had gathered to watch a fast, skilful game which featured quite a few talented players on both teams. Included in the crowd were representatives of the Ulster Rugby Talent ID Department as well as the Ulster Branch President, Graffin Parke.

The Armagh team started strongly with their impressive midfield pairing of Shea 0’Brien and Matthew Reaney taking the game to the Rainey team from the kick off and only great defence from Charlie Clarke and Ciaran McCann prevented an Armagh try. However, the Armagh team did force the Rainey team into conceding a penalty and Shea 0’Brien converted the opportunity to give his team a 3-0 lead after three minutes. The Rainey team recovered well from this early setback with Adam Thorton causing problem for the Armagh defence with his dynamic carrying of the ball. Following a lineout in the opposition 22m area the Rainey pack mauled the ball impressively toward the Armagh line. The maul was pulled down illegally and the referee had no hesitation in awarding a penalty try to put the Rainey team into a 7-3 lead after ten minutes. Midway through the first half Shea 0’Brien made a telling break and outpaced the Rainey cover to score an unconverted try in the corner which gave the Armagh team an 8-7 lead. Following a sustained period of Armagh pressure, with Aaron Whyte and Ryan Morton carrying strongly, Rainey conceded a penalty. Shea O’Brien converted the kick to see his team into an 11-7 lead. Five minutes before the break Matthew Reaney made a great midfield break before off-loading the ball with a clever pass to Shea O’Brien who finished with an unconverted try to increase the Armagh lead to 16-7. The Rainey team responded immediately and, following a series of phases, Nathan Jeffers sped his way through the Armagh defence before touching down for the try. Kealan Friel added the extras to reduce the Armagh lead to 16-14 at the interval.

Armagh started the second half in a very positive manner. Ten minutes after the restart a great take in a lineout by Ryan Morton was moved off the top which enabled Nathan Rodgers to find Brandon Gribben running at pace into space. Brandon played a “show and go” and finished off with a fine score close to the posts. Shea O’Brien added the conversion to increase the Armagh lead to 23-14. The Rainey team mounted a great comeback and took play deep into Armagh territory. Charlie Clarke, Matthew Smyth, Ryan Cairns and Marc Feathers all came close but well-organised Armagh defence, linked to a number of handling errors, kept the Armagh line intact. With just minutes of the game remaining Nathan Rodgers found Aaron Whyte running a great line of support. Aaron made the most of the space he had created a finished off with a fine try. Shea O’Brien added the touchline conversion to secure the 30-14 win for the Armagh RFC U18 team at the end of this exciting Nutty Krust Tournament semi-final game.

As usual with the Nutty Krust Tournament the players all received a post-match meal which was sponsored by Jim Hewitt Meats, prepared by the staff in “Scrummies” kitchen and organised by the ever present Sid Rowe. All players, as well as their coaches, then received a Nutty Krust loaf on departure as did the referee, Mark Miller, and his touch judges, Brian Wilson and Darryl Neilly.

Paul Stephens, a member of the Nutty Krust Tournament organising committee, then presented the impressive Armagh 2nd Row forward, Ryan Morton, with the Nutty Krust “Man of the Match Award” at the post match ceremony.

The Nutty Krust 2018 Final will take place at Chambers Park on Wednesday 25th April when Ballynahinch RFC U18’s will play Armagh RFC U18’s. All supporters will be made to feel very welcome at the final of this prestigious event which will kick off at 8-00pm.

Elsewhere, The U14s won their semi-final on Saturday 14 April by beating Dungannon 48-5 in Armagh and they will now meet Clogher Valley in the final of the Ulster Carpets U14 plate on Saturday 21 April in Cookstown.

The U16s overcame a very large Malone team in their Ulster Carpets U16 Cup quarter final winning 27-0 and they will now meet Clogher Valley in the semi-final on Saturday 21 April at Clogher Valley.