Much to savour despite last-gasp defeat 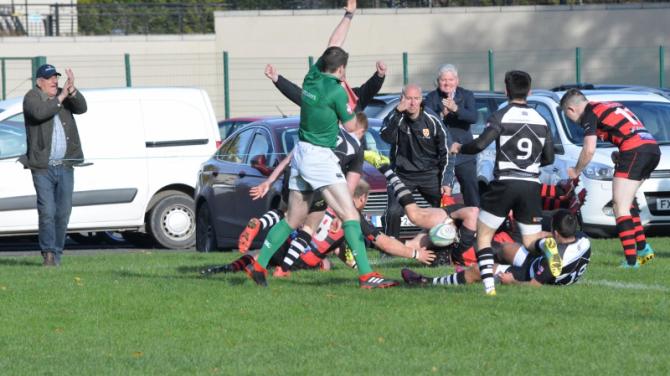 SOMETHING  had to give on Saturday at the Palace Grounds.

To scene-set, after a couple of rounds of this season’s All-Ireland League Division 1B campaign, the record of those going head to head was played two, won two in either case.

Wearing black and white were Old Belvedere, who arrived from Dublin’s fair city occupying the 2nd rung of the 10-step ladder. Adorned in red and black were the City of Armagh, who lay 4th with eight points. Their guests had nine, the differential being the bonus the Dubliners had picked up in the previous week’s 39-17 home victory over Navan at re-named Ollie Campbell Park.

When Armagh and Belvo met in 2018/19, home advantage proved decisive. In November 2018 at the Palace Grounds, the hosts were 15-9 winners of what was a close match. In the February 2019 re-match at what was still Anglesea Road, once again it was the home side who emerged triumphant, on this occasion by a 29-5 margin.

And at the end of last season’s 18-match series there was little to choose between the pair; Belvedere were 7th with 44 points, the breakdown being eight wins, nine defeats and a draw. Armagh were 8th with 42 points having won eight, drawn two and lost eight of their matches.

Coached by Andrew Kenny, the Old Belvedere Class of 2019/20 came to the Palace Grounds having made an impressive start to the current series – namely a 22-20 victory over Shannon in Limerick followed by that big win against Navan.

Thus they had nine points in comparison to the seven they had after the first two rounds 12 months earlier when they opened with a 42-28 bonus-point home victory over then-Simon McKinstry-coached Banbridge. A week later, at Donnybrook, they drew 9-9 with close neighbours, Old Wesley.

Consider; home to Banbridge in October ’18 was significantly easier than away to Shannon a couple of weeks ago in the first AIL match of 2019/20. Conversely, by any stretch of the imagination, that derby date with Old Wesley a year ago was a much more difficult fixture than that recent rout of Navan in Dublin 4.

Navan were playing in 2A this time last year. They were duly upgraded via the play-off route, making this their first season in what is the highest level at which they have ever competed.

But with Armagh having beaten Naas 13-7 at the Palace Grounds on October 5 and St Mary’s College 14-20 at Templeville Road on October 12 past – the latter a match in which they showed real heart admirable passion - they too were up for this latest challenge.

Indeed, they went into it boasting a 100% record by virtue of having won each of their SONI Premier League fixtures and a pair of Senior Cup matches in addition to that brace of AIL victories.

But everybody suspected Old Belvedere were going to ask tougher questions than any of those Armagh had faced previously. And they were right, for Belvo shaded the verdict, winning by two points as a result of having landed a literal last-kick-of-the-match penalty.

They did not win by what, in racing circles, is known as ‘a short head’ after a figurative photo-finish. No, this was more a case of ‘by a pimple’ on the metaphorical horse’s nose.

It was a magnificent contest between two really evenly-matched teams. The scoreboard changed repeatedly, for although Armagh went 5-0 up early on, Belvo responded with a converted try, followed by a penalty, which saw them lead 5-10.

But back came the hosts with a converted try of their own in the 35th minute, thereby edging into a 12-10 lead, only for the visitors to reply with a penalty. So, at half-time Belvedere were 12-13 to the good.

The second half saw more of the same, with the sides cancelling out one another’s scoring, right up to the final-play. Then, leading 26-25, Armagh conceded a penalty between their own 10 and 22-metre lines and with the last kick, Belvedere captain Steve Crosbie split the posts yet again. Heartbreaking for the hosts who had given everything.

Cracking entertainment and full-blooded action interwoven with more than a few flashes of magic and others which were less impressive as they resulted in scoring chances either being squandered or gifted to opponents as a result of momentary lapses in concentration.

There is much to admire about this Armagh side and doubtless they will have spent the past few days rueing having finished with a losing bonus rather than four more points from yet another win.

With three out of three wins, Belvo look to be one of the stronger teams in 1B. Armagh’s solace will come from knowing that they are good enough to have beaten them. And they can take considerable heart from that.

This season may mirror 2018/19 in that there is unlikely to be much space between Belvedere and Armagh at the end of it. One would suspect, however, that they are likely to finish higher up the table than 7th and 8th.

Meanwhile Navan can start preparing for an Armagh backlash on November 2.