A South African who is hoping to develop - and that's no bull! 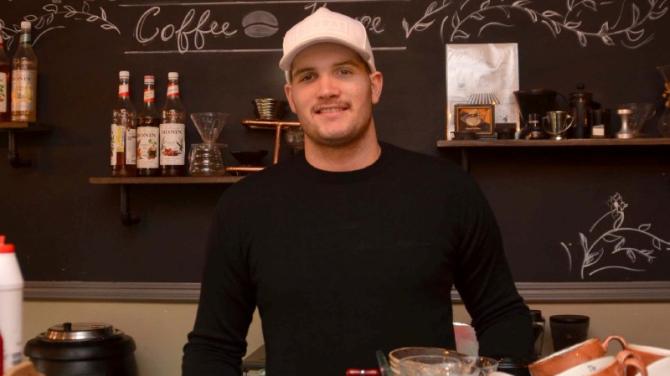 THERE’S a big difference in the early-summer warmth of Pretoria and the onset-of-winter chill of Armagh.

On Friday morning, when City of Armagh’s most recent recruit reported for work at The Craic’d Pot Coffee House, the temperature in the administrative capital of the Republic of South Africa was a glorious 30C. In stark contrast, in Upper English Street, it was a nippy 6C.

So, 21-year-old JJ Schweepers is having to acclimatise – literally - to life in what for the next nine months will be his ‘home’.

In rugby football’s current parlance, the former Vodafone Blue Bulls Under 19s player is ‘a big unit’ – 1.98m and 112.5lbs worth of raw power. For those of us ‘of a certain age’ who require a translation, that’s 6ft 6ins and 17st 5lbs.

Back in Pretoria he was deployed as an open side flanker; here he’s big enough to merit inclusion in the second row.

So how does he come to be in Armagh? Well, such is the intense interest in the game in his native South Africa – remember that Springboks are the newly-crowned world champions following their 32-12 annihilation of England on November 2 – that Under 19s’ rugby merits television coverage.

That’s how the Palace Grounds club became aware of his potential. And on learning that Schweepers had just failed to land a senior contract with the Bulls, they watched footage of him in action. They also read his CV and then contacted him to suggest that Armagh could help him in his development. It was a suggestion to which the grateful Schweepers replied in the affirmative.

“I arrived in September and I’m here until the end of the season,” he replies when asked how long he expects to be here.

And the purpose of his visitation? “I want to take my rugby [career] further, but I don’t know at this stage if I can do that in Armagh. We’ll see where it goes.”

Although he has a part-time job in Scott King’s coffee house, one gets the distinct impression that, in an ideal world, he would love to be a full-time athlete.

“I spend a lot of time swimming and in the gym and at the sauna,” he explains when asked how, as a stranger in a foreign land, he spends his time. “I do explosive work-outs in the gym – I’m not a guy who picks up weights – just  explosive stuff to keep me fit. And I run 3ks around the block.”

He describes his reason for having come here as being “to achieve something.” In rugby, rather than in general, that is.

He also reveals the fact that a club in the United States have been in touch to ask about his availability.

“That might work out, I don’t know,” he muses. “The season in America starts when the season here ends. It just depends; it’s a case of grabbing every opportunity as and when one becomes available.”

Whilst his status is purely amateur, his approach to training is fully professional.

“On Tuesday and Thursday nights I give everything on the pitch - and I’m gyming before going to training,” he points out. “Like I say, it’s about grabbing every opportunity and doing everything you can to improve.”

As for the standard of rugby he has found since coming to the Cathedral City, his analysis is, “The seniors in the team know their rugby and there are things I’m learning from them about their line-out play, for example.”

As a rookie lock, mastering the calls and codes is pretty important!

But there is more than a hint of regret in his voice as he reflects, “I almost got a contract with the Bulls for the senior Currie Cup squad….but it’s so difficult to get in.”

And how could it be otherwise? The Currie Cup is South Africa 's premier domestic rugby competition featuring the crème de la crème of the Rainbow Nation’s vast wealth of talent.

Aware of the on-going party in his homeland following the ’Boks’ enthronement as world champions, he smiles as he imagines events back there.

“In Pretoria it will have been mad,” he says. “And I am happy for them, because they deserved it,” is his assessment of his country’s rout of the English.

His commitments to Armagh meant he was unable to watch that as it happened, a fact he explains by saying, “We were on the bus on our way to Navan that morning, so I only saw the first three minutes!”

His pain at having missed witnessing the 2019 World Cup final as it unfolded ‘live’ was to some extent offset by the fact that he started that afternoon and played a telling part in Armagh’s 19-0 victory.

And if things here go as he hopes, there should be quite a few more such contributions.