Family first as Best bows out 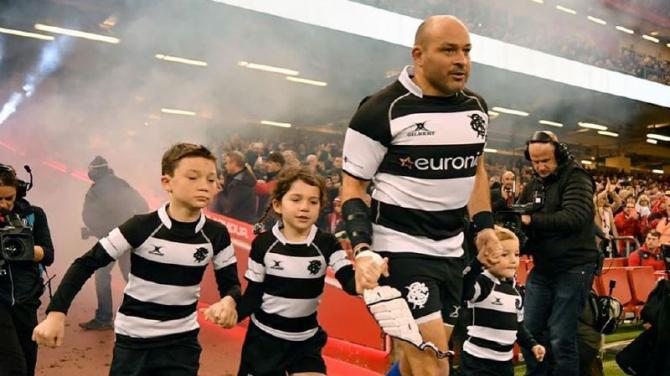 POYNTZPASS sporting great Rory Best will spend this Christmas happily retired from rugby after finally hanging up his boots following a fun farewell playing for the Barbarians in recent weeks.

The outgoing Ireland captain, whose IRFU contract finished at the end of this autumn's World Cup campaign, has revealed that he had offers from English Premiership club Bristol and others to extend his career.

Although flattered by the interest and tempted by the prospect of keeping playing having enjoyed his Barbarians tour so much, in the end Rory decided to put family first and stick to his original retirement timetable.

After initially indicating the World Cup would be his international swansong, Best announced at the start of April that he would also retire from professional rugby rather than play on with Ulster until the end of this season as fans had hoped.

"Immediately after the World Cup, you're full of thoughts like 'I feel alright, I feel like I could keep playing and I want to keep playing," admitted Rory, while launching the Specsavers Grandparent of the Year Award in Dublin.

"Then when Bristol came in, there was almost a snowball effect and there were a couple of other options after that.  I think if I'd been going anywhere it would have been Bristol and the chance to work with (head coach) Pat Lam.

"The thought of (still) being wanted at my stage is a nice feeling and, for a while, I was looking at it from the perspective 'here's an incredible opportunity' but in the end I felt the family were ready to have me home.

"Ultimately we wanted to be at home as a family and that was the long and short of it, as flattered as I was," reflected Rory, who has spent his entire 15-year professional career where his heart lay, with his native Ulster.

Throughout a magnificent career which brought 124 Ireland caps and two Lions tours, Best had numerous offers to go abroad but stayed local to Ulster in spite of the 2006 Celtic League title being the only silverware won in the white jersey.

"That was just my second season and you think then there will be more opportunities.  Not winning more with Ulster is a regret," says the man who skippered Ireland to the 2018 Grand Slam and their first two victories ever against New Zealand.

He achieved two Grand Slams and two other Six Nations titles with Ireland and, in a very successful four-year spell as captain, led the team to top spot in the world rankings for the first time ever.

Unfortunately all four of his World Cup campaigns ended in disappointment, not least this autumn when Joe Schmidt's men in green lost a group game to hosts Japan and were hammered by the All Blacks in the quarter-final.

Now with the freedom of being outside the bubble, Best has reflected at length and with great honesty as to what went wrong for Ireland since the heady days of last year.

However his liberating Barbarians tour brought him back from the intense scrutiny of competitive professional rugby to the joy of playing for fun and a reminder of this sport's special values.

After captaining the Barbarians against Fiji at Twickenham under Eddie Jones in what was supposed to be a one-off, Rory decided to go on the next leg of the tour after all and came off the bench to kick a left-footed conversion in the victory over Brazil!

He returned home to attend the funeral of great Portadown rugby man Willie Gribben but joined up with the Barbarians again, now with Warren Gatland as coach, for the Cardiff fixture against Wales.

Skipper Best led the team out at the Principality Stadium with his three young children togged out in Barbarians kit as mascots and departed to handshakes from opponents and a wonderful standing ovation from a crowd of close to 70,000.

It was a fitting final act to the last lap of what has been a long goodbye but each tribute has been no more than one of rugby's good guys, or his successful career, deserved.

He has returned to civilian life and the farm for now with future plans yet to be decided upon but, just like as a player, Best won't be short of offers and has much still to contribute the sport of rugby in whatever capacity in the years ahead.