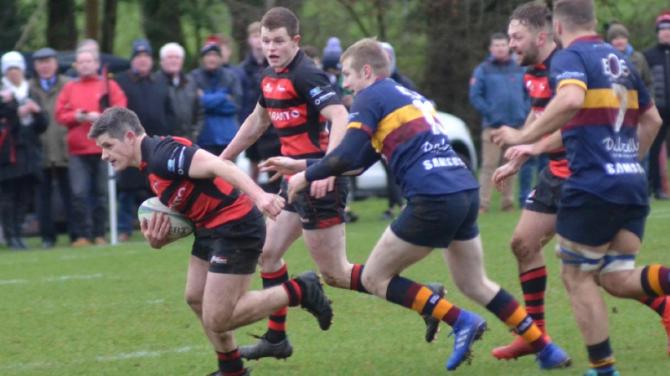 CITY of Armagh registered a very welcome Energia All-Ireland League win on Saturday by beating Banbridge in a hard-fought Ulster derby battle with Banbridge at the Palace Grounds.

With Bann having won comprehensively at Rifle Park before Christmas, the pressure was on the hosts to turn things around given their disappointing recent results.

Thankfully the morning’s heavy rain eased and Banbridge kicked off in dry conditions on a well-drained pitch. The visitors found themselves on the wrong side of the referee’s whistle three times in the opening six minutes and Armagh’s Cormac Fox took a shot at goal but was narrowly wide from 40 metres.

With eight minutes on the clock, Banbridge had their first line break of the match when Conor Field came off his wing following a line-out on half-way. He kicked ahead but Armagh gathered and managed to clear the danger.

Bann’s backline were looking sharp but a forward pass in mid-field saw Armagh win their first scrum penalty of the match. Fox kicked to touch and Armagh won the line-out to set up a drive into the guests’ 22. A cross-field kick was secured by Shea O’Brien, but Banbridge had the young centre well covered.

A penalty advantage however, was being played and Armagh sent the kick into the 22 for a line-out 5 metres out. Inaccuracy, however, led to a knock-on and the chance was lost.

On 15 minutes, Armagh were penalised for crossing, giving Bann a chance to set up an attacking lineout on the home 22. Armagh made a steal but were penalised after making ground up to half-way.

The first quarter ended with the high penalty count on both sides and neither able to take advantage of ensuing lineouts.

Banbridge’s backs were showing more enterprise and threatened again on 25 minutes until a handling error thwarted their efforts. With half an hour played, an interception by Banbridge could have proved costly, but the referee awarded Armagh a penalty and sent Banbridge prop, Callum Reid to the sinbin.

Armagh kicked the resultant penalty to touch on the visitors’ 22 and this time they were successful in getting good momentum from the line-out maul. With play on the Banbridge try line the first score was on. The referee, however, unhappy with Armagh’s drive to the line and penalised them for a double movement.

Banbridge cleared the danger and brought play into Armagh territory. A scrum penalty to the visitors was kicked to touch but Bann’s line-out had been misfiring and an overthrow was picked up by replacement prop, Peter Lamb who made good yards.

No. 8 Neil Faloon then made a trademark burst up the field, making 25 metres before Armagh recycled the ball to the wing where Josh Morton was forced into touch.

But the stop-start first half finally came to life when Armagh scored two tries in the space of five minutes just before the interval. From a scrum on Bann’s 10-metre line, the ball was moved right and scrum half, Gerard Treanor, put in a grubber kick behind the visiting defence. Shea O’Brien won the race to reach that and touched down at the corner flag for the game’s opening score.

Fox kicked a superb touchline conversion to open up a 7-0 lead.

A good exit by Armagh from the restart then led to a line-out on half-way. Bann’s throw was not straight and a scrum penalty to Armagh allowed them to threaten once again before half-time. The line-out possession was secured and when the pack drove for the line,  hooker Andrew Smyth grounded the ball. The conversion was missed but half-time arrived with Armagh leading 12-0.

After some scrappy play at the resumption, Armagh managed to get to get a foothold in Bann’s half. Fox was kicking well and using the touchline to keep the guests pinned back in their own territory.

And when, on 56 minutes, they knocked on at the line-out, the Armagh front row won another scrum penalty just outside Bann’s 22. Turning down a possible three points, Fox kicked to the corner looking for another try from the lineout. This time. However, Banbridge turned over Armagh possession.

The third quarter ended with Banbridge re-emerging as an attacking force. Their backline was more incisive and made 40 metres to take play up to the home 22 where sustained pressure led to two penalties and a line-out 5 metres out. Armagh were on the rack.

Ulster’s David O’Connor spurred his side on and when he was impeded in the air at the line-out, Armagh’s Nigel Simpson was yellow carded. And Bann made the extra man count when flanker Ryan Hughes was driven over for an unconverted 67th minute try.

The tension was ramped up in the final 10 minutes as Banbridge sought a late score that potentially could tie the game. Not for the first time this season, Armagh added to the problem by starting to concede cheap penalties.

Bann  kicked deep into home 22 looking to set up a line-out maul, but on the second attempt the ball was knocked on. Then a penalty for dissent saw them clear their line, only for the concession of another penalty enabling Banbridge to up camp again in the Armagh 22.

Deep in injury time, they looked like breaking through, but terrific home defence denied them. The ball went loose, Simpson secured it and the referee blew for full-time.

The Armagh coaching team were delighted to have secured the victory. Willie Faloon said, “Banbridge were always going to be difficult opponents. But our set piece was strong, setting up the foundation for the win. And our defence in that final 10 minutes was outstanding.

“Now we need to build on this performance as we enter the second set of AIL fixtures.”