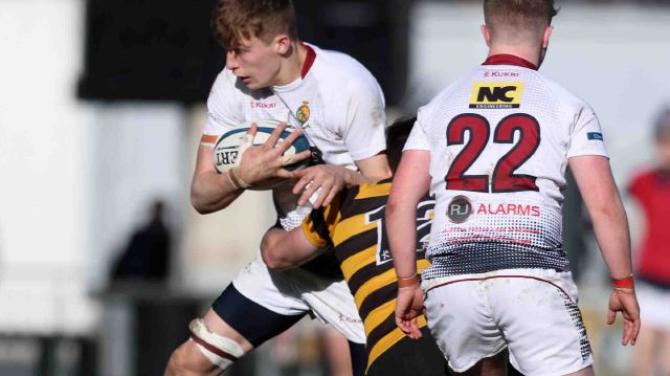 IF the outcome of cup finals rested on how previous generations of the competing schools had fared, Royal School Armagh would be guaranteed the trophy for a 10th time on March 17, 2020.

The College Hill boys have appeared in 13 finals, winning nine and losing four.

Traditionally the Lisburn seat of learning has been famed for its hockey prowess rather than any rugby pedigree. But having been also-rans in the latter of those two codes up until the late 1980s, they have since developed to a point whereby they are many people’s favourites to win this year’s competition, thereby finally ending their hitherto barren run.

Significantly, they and Ballymena Academy are the only schools to have beaten RSA this season. Having said that, Wallace will be mindful of the fact that although Ballymena beat RSA when there was nothing at stake, the College Hill boys won when the sides went head-to-head in the quarter-finals of the 2020 Danske Bank Ulster Schools’ Cup at Galgorm Road on February 23. Cometh the hour, cometh the boys…of RSA.

When the Royal and Wallace square up in east Belfast on March 17, it will be the locals’ fourth successive clash with fellow Tier 1 opponents. Both of the pair belong in the upper bracket, of course, the other four in that sextet of superiors being Campbell College, Royal Belfast Academical Institution, Methodist College Belfast and Ballymena Academy.

The Royal are the only school in the 2020 Danske Bank-sponsored campaign to have faced fellow-top tier opponents in each of the three rounds en route to Ravenhill.

Campbell – Schools’ Cup runners-up in 2019 – were outscored by five tries to nil in the last 16 meeting at College Hill on February 8. Two weeks later, when Messrs Faloon and Parker took their charges to north Antrim, they returned having chalked up a magnificent 17-14 victory.

Next up were RBAI, who boast the second most successful Schools’ Cup record in the history of the 144-years-old competition, with pride of place belonging to their Methodist College rivals.

Last Tuesday afternoon’s semi-final was arguably the best in the long story of the Schools’ Cup, for having appeared to be down and out minutes into the second half, at which stage they trailed 22-5, RSA responded with a four-tries blitz to which Inst, quite literally, had no riposte. Beyond the 41st minute, RBAI failed to add a point to their tally.

And it is as a result of having snatched victory from the jaws of defeat that RSA will find themselves back on the Ravenhill stage on March 17.

Remarkably, this is the fourth year in a row that they have appeared at the home of Ulster Rugby. In 2017 they won the Medallion Shield by virtue of having beaten Lisburn’s other school – Friends – 10-6 in the Ravenhill final.

Twelve months later (March 2018) they returned to the same venue where they beat then-holders, RBAI, 26-22 and by so-doing put paid to their opponents’ attempt to win the Schools’ Cup for the fourth year in a row.

But a fortnight later, RSA’s bid to win the trophy for the first time since 2004 ended in disappointment when Campbell beat them 19-13.

Importantly, however, as a result of their participation in those two matches, the Royal School’s players had sampled the atmosphere, excitement, tension and high level of media exposure occasioned by Schools’ Cup showpieces.

Last year (2019) they added a further visitation to Ravenhill when they reached a third successive Schools’ Cup semi-final. That, too, was against Campbell and once again the Belfast side shaded the verdict, the wafer-thin differential on that occasion having been a mere two points.

Last week’s sensational recovery from a 17-points  deficit confirmed the stuff of which this current RSA side is made. So, too, does that magnificent run of results against Campbell, Ballymena and RBAI.

With only the first of those three ties having been at home, that also adds irrefutable evidence of the locals’ quality.

While Wallace, too, boast impressive strength, their record in recent seasons bears no comparison to that of RSA who will occupy the home (Ulster Rugby) dressing room. I suppose one could argue that having been to Ravenhill as often as has been the case in the past few years, they have earned the right! But they must now finish the job if they are to win the second oldest competition in world rugby.

Thus far in the competition they have shown steel and skill in equal measure in seeing off three of the biggest names in Ulster schools’ rugby. They scored five tries against Campbell, followed by five more against RBAI.

Even more remarkably, on each of those occasions, those scores came from five different players, with forwards and backs alike getting in on the act. In other words, they can score from a variety of positions and situations, making it particularly difficult to second-guess them.

In addition, they have shown outstanding discipline to date and given that they play with such ferocity, that in itself is as noteworthy as it is admirable. Here captain Sam Rainey deserves much credit for the example he has set in leading from the front.

Coaches Faloon and Parker also are worthy of commendation for having instilled such controlled aggression within the laws of rugby football.

Undoubtedly Derek Suffern-mentored Wallace are a very, very good side, something they underlined heavily by lowering the dark blue and white colours of holders, Methody, in last Wednesday’s semi-final. With 63 Schools’ Cup final appearances and 36 triumphs to their credit, MCB have the best record in the history of the competition, so to have felled them was a fine achievement.

But in view of what they themselves have done, shown and proved on their way to the final, RSA certainly will not be labouring under any sense of inferiority.

As has been the case all the way through, they will treat next Tuesday afternoon’s opponents with the utmost respect. But forget any suggestion that they will be intimidated or cowed by the prospect of facing them.

Bottom line? RSA are battle-hardened warriors, a fact confirmed by the wounds of 2018 and 2019. And having already taken the scalps of much-fancied rivals of the calibre of CCB, Ballymena and RBAI, the boys of Armagh’s Royal School have proved that they are a match any big-name opposition.

And hopefully a 10th RSA triumph…