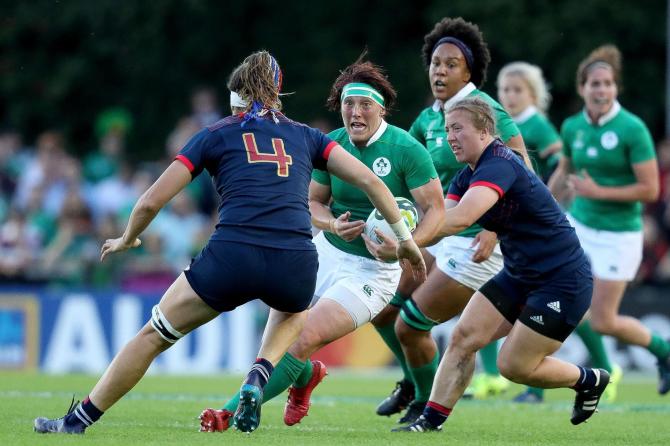 This year’s delayed and condensed Six Nations got underway at the weekend when champions England crushed Scotland 52-10 and France walloped Wales 53-0 in the opening group games of a competition being played under a different format this year.

Instead of the traditional round robin, the six competing nations have been split into two groups with play-offs scheduled for April 24 against the team in the corresponding position in the other section to determine placings.

Realistically, even with home advantage, defeating France will be a big ask so having to face Wales away isn’t an ideal draw, and the fixtures don’t fall favourably either for the girls in green.

Wales will be match sharp from facing France the previous weekend whereas Ireland last played in October, against Italy, and the majority of this squad haven’t even had any competitive club rugby for more than a year due to the coronavirus restrictions.

It is set to be a fascinating Championship, with Wales and Scotland both having new coaches, in the latter’s case after former Ireland supremo Philip Doyle stood down due to coronavirus concerns.

Ireland beat both teams on consecutive Sundays at the start of February last year, a thrilling intercept try by teenage wing Beibhinn Parsons in an 18-14 win against the Scots being followed by an impressive 31-12 victory over Wales in difficult conditions at Donnybrook.

They then put up a defiant fight in losing 27-0 against full-time professionals England in Doncaster in a match marred by bad injuries to veterans Lindsay Peat and Sene Naoupu before the worsening coronavirus situation saw the remaining matches postponed.

When the competition resumed in October, Ireland won 21-7 against 2019 runners-up Italy but another outbreak of Covid-19 denied them a crack at a French team which had only drawn with the Scots.

With the long gap, it will be a challenge for Ireland to pick up where they left off six months ago when facing a Welsh team well warmed up though possibly a little demoralised by that heavy loss in France at the weekend.

We can expect Ireland to be ravenous though after months of intense training and there is excitement about the inclusion of flying winger Aimee-Leigh Murphy Crowe, who has previously made the World Sevens Dream team, in the national XVs squad for the first time.

“She has a brilliant rugby brain and she does her homework.  She works so hard off the field and performs so well on the field, so I can’t wait to see her tear it up in this campaign,” is Ireland captain Ciara Griffin’s endorsement of Murphy Crowe.

“It’s been a tough few months in terms of ups and downs and uncertainty about playing and not playing, so it’s great that we have matches now.  We’ve had 20 camps and 60 pitch sessions preparing for this and can’t wait to get going and play a Test match.

“The girls have been phenomenal, I can’t commend this group enough.  They are the most dedicated and resilient group you will ever meet.  Their commitment to the jersey is second to none and we can’t wait to go out and show all the work we’ve done behind the scenes.”

Ireland go into this Six Nations without one of only two remaining links with that historic Grand Slam, former Ulster captain Larissa Muldoon from Ballybofey, and two of their four Wasps forwards, Ciara Cooney and Edel McMahon, through injury.

With the world series still suspended, there has been an influx of sevens specialists in Adam Griggs’ Six Nations squad of 35 including four of the five uncapped players, namely Murphy Crowe, Eve Higgins, Emily Lane and Grace Moore.

There is also a call-up for UL Bohs back row forward Chloe Pearse but no sign of former Kerry gaelic captain Louise Galvin, who turned 34 on Saturday, but was expected to be drafted in after retiring from the sevens version of the sport.

Former All Ireland-winning Dublin gaelic footballer Peat, set for her first international outing since turning 40 last November, and the dynamic Linda Djougang are the established starting props with Laura Feely reserve loosehead and Katie O’Dwyer also in the squad.

With Emma Hooban back in the squad it would appear Leah Lyons is being considered primarily as a tighthead prop, in which case Ulster’s Neve Jones should have a decent chance of being back-up to first choice hooker Cliodhna Moloney in the matchday 23.

In the absence of Cooney and Bobbett, McDermott and Fryday pick themselves in the second row with the versatile Brittany Hogan providing back five cover, probably along with rising star Dorothy Wall.

That is assuming captain Griffin and her predecessor Claire Molloy are joined in the back row by Anna Caplice of Harlequins rather than the skipper packing down in the middle of the loose forward trio with Wall at blindside.

Enniskillen’s Kathryn Dane, the only Ulster player in the squad apart from young guns Jones, Hogan and Claire Boles, should continue as starting scrumhalf ahead of Ailsa Hughes but selections elsewhere in the backline will be interesting.

Griggs must decide whether to continue the experiment of fielding natural back three player Hannah Tyrrell at outhalf, start investing in Higgins or possibly pick Ellen Murphy because the Premier XVs has been going ahead.

There will be great interest in whether Murphy Crowe will be pitched straight into the starting line-up in an exciting back three with Eimear Considine and Parsons in preference to the steady Delany, who has had the advantage of regular game-time with Sale Sharks.

The evergreen Naoupu is still first pick centre and has been partnered by young Enya Breen though the tough-tackling Katie Fitzhenry made a welcome return via the bench against Italy last October.

*for local angles on the women's Six Nations, pick up a copy of this week's Ulster Gazette (in the shops from Tuesday)