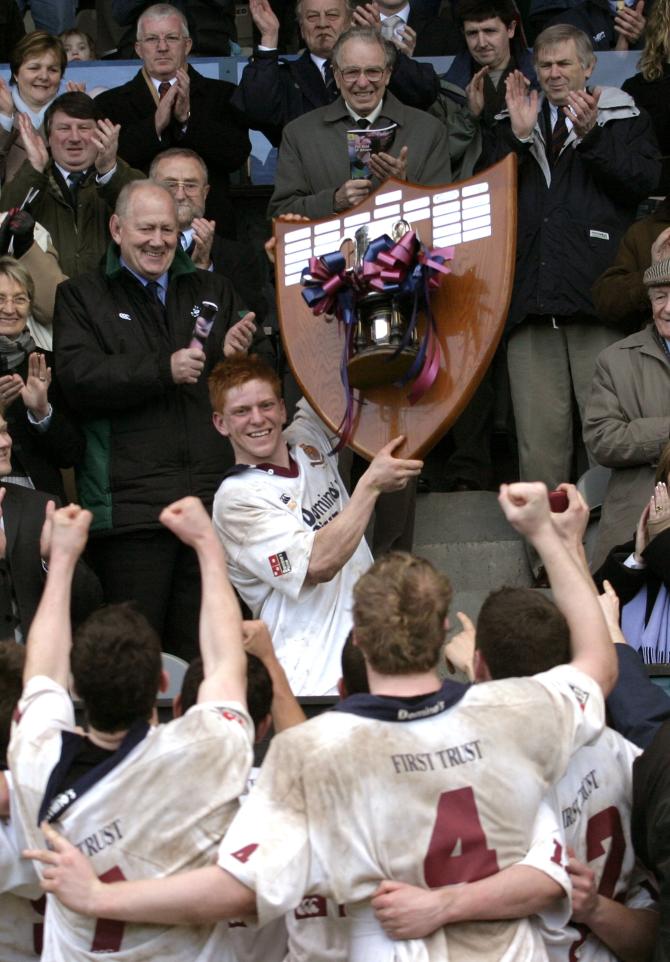 The distressing scenes when Christian Eriksen collapsed during Denmark’s game against Finland disabused us of any notions about football being more important than life and death.

Your columnist wasn’t watching at the time but hearing about what had happened took me right back as always to that dreadful day in March 2004 when tragedy struck John McCall.

At the start of the previous week, flame-haired back row forward John had captained my alma mater Armagh Royal to a first Schools Cup success since 1977 at Ravenhill.

Having got a few quotes from him as a daily newspaper rugby correspondent just before he got on the team bus, I shook John’s hand and wished him well in South Africa.

It was an incredibly exciting time for the young man, who was soon heading off to the rainbow republic with the Ireland Under 19 squad for the Junior World Championships.

It was an exciting time too for this rugby journalist, with the prospect of covering a long overdue Ireland Triple Crown triumph on the back of this success for my old school.

My earliest rugby memories are from the 1985 Triple Crown-winning campaign, but nearly two decades had gone by without Ireland beating the other home countries in a season.

The nineties was a largely unproductive decade for Irish rugby but things had improved considerably under Warren Gatland initially and then his successor Eddie O’Sullivan.

However, the men in green had blown a great chance in the 2001 Six Nations when losing at Murrayfield in a tournament carried over until the autumn because of Foot and Mouth.

They reached a Grand Slam decider in 2003 but took a bit of a hammering in that final fixture at Lansdowne Road against England, who went on to win the World Cup later that year.

But beating the world champions at Twickenham the following season meant Ireland were hot favourites to complete the Triple Crown with a home win against Scotland in Dublin.

Sure enough, Brian O’Driscoll’s boys did the business but, as the afternoon went on, news began to filter through that something serious had happened in the Ireland Under 19 game.

We knew that they were playing New Zealand in Durban, but everyone in the pressbox was bewildered by the suggestion John McCall had died on the field during the game.

That was before the social media era, but rumours and half truths have always spread throughout history and there was much speculation which was well wide of the mark.

Rather than being killed in some freak rugby accident, ostensibly fit and healthy teenager John had actually collapsed and died due to a condition called cardiomyopathy.

As an Armagh man who knew the McCall family and didn’t want inaccurate reporting to cause them further upset, I ended up working with every Sunday paper in these islands.

It was absolutely surreal sitting there alone in the deserted old West Stand answering queries and filing copy about the tragic passing of a lad I’d chatted to just 11 days earlier.

Ireland’s eagerly-awaited Triple Crown no longer felt like it mattered much and, on the way up the road, I stopped to take a call from John’s Schools Cup-winning coach Kenny Hooks.

Mr Hooks had been both my Maths teacher and age group rugby coach back when he was recalled to the Ireland team after an eight-year absence to face Wayne Shelford’s All Blacks.

Covering the Royal’s Schools Cup success brought me back in touch with him, but we could never have envisaged sharing such an emotional call so soon after that happy time.

John had a huge funeral in Armagh the following Sunday afternoon and his brave parents thereafter threw themselves into working with the Cardiac Risk in the Young (CRY) charity.

As with Nevin Spence, who tragically lost his life a farm accident in September 2012, one often wondered over the years how their rugby careers might have progressed.

Both could, conceivably, having been playing professional rugby even now but that is a very minor matter compared to the blessing just having them would have been for their families.

Thankfully, Christian Eriksen, like the Bolton Wanderers footballer Fabrice Muamba back in 2012, has survived his horrendous ordeal and will hopefully have a long life ahead of him.

There was considerable debate after the Danish game about the television cameras being intrusive, though the public being shocked has helped raise awareness of a vital issue.

It is difficult for grassroots sport to replicate the sophisticated testing which can be carried out by professional set-ups or to have the same medical care on hand that helped Eriksen.

However, we must seek to do what we can, and as a Sport NI Board member it has been an easy decision to approve significant funding for defibrillators for sports clubs in recent years.

But back to the relatively trivial importance of football or indeed any sporting outcome compared to life itself, and it feels like the authorities haven’t covered themselves in glory.

Shell-shocked Denmark were given what felt like a fairly brutal ultimatum from UEFA about getting their fixture against Finland fulfilled in the aftermath of the Eriksen incident.

Under duress, they completed the match later that evening and unsurprisingly lost but thankfully ended up progressing to the knockout stages in dramatic circumstances.

Because of the Eriksen sympathy factor and their great escape from their group, many neutrals have adopted the Danes so Wales will be cast as possible party-poopers tomorrow.

England against Germany, yet again, is probably the most captivating of the ties in the last 16 stage, with the host nation still hoping to go all the way in this tournament.

You wonder whether their hope that Gareth Southgate’s side can lift the trophy has influenced the UK Government’s decision to give in to UEFA demands regarding the final.

With home advantage again, this may be England’s best chance for some time to end their drought at major tournaments stretching back to that famous World Cup triumph of 1966.

So Boris Johnson has agreed to make special allowances for UEFA’s VIPs to bypass the normal quarantine requirements in return for the Euro 2020 final remaining at Wembley.

Some may see that as a pragmatic compromise but, given that coronavirus risks remain real, others could conclude football is being treated as more important than life and death.