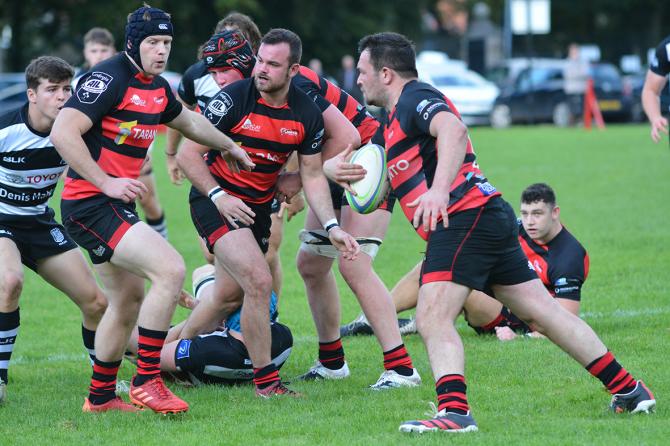 FOLLOWING their away victory at Banbridge, City of Armagh continued their good start to the Energia All Ireland League, with a bonus point win at the Palace Grounds against Dublin side Old Belvedere.
Played in glorious sunshine, the match was hugely entertaining for the large crowd of spectators, delighted to see AIL rugby back after such a long absence.
The home side got off to a dream start with a try after 40 seconds. Will anyone score a quicker try this season? Armagh kicked off, regained possession on the Belvedere 22 and centre, Chris Colvin made a fine break to feed fellow centre, Shea O’Brien to touch down.
The conversion attempt was unsuccessful and from the restart, Belvedere brough play up to the Armagh 22. The ball was spilled and Armagh quickly moved the ball wide where full back Kyle Faloon broke clear and fed winger, Andrew Willis. Following some great inter-passing Faloon crossed under the posts for Armagh’s second try with less than four minutes on the clock. The fullback converted his own score and City of Armagh were off to an impressive start, 12 nil ahead.
Belvedere used their driving maul to good effect from a lineout and almost scored on 10 minutes but a neat grubber behind the Armagh defence just went into touch.
Two minutes later, the visitors did get on the scoresheet with a neat cross-field kick collected by fullback Colm Hogan who touched down for an unconverted try and 12-5.
Remarkably Old Belvedere scored again straight from the restart. Flanker Colin Mallon made a storming run from halfway and passed to his captain, Dean Moore to score. Outhalf Justin Leonard converted and the match was tied at 12-12 with fifteen minutes played.
With four tries in the first quarter, the second quarter was limited to just the one.
Armagh had a good spell of pressure in the visitor’s 22 and Kyle Faloon was forced into touch a yard from the line. The referee was playing penalty advantage, Romain Morrow kicked into the corner and the home pack drove for the line. Belvedere’s defence was well marshalled and a scrum penalty saw the Dublin side relieve the pressure. A handling error by the visitors was punished by Armagh with Belvedere scrambling back in defence, only to concede a penalty on their 22. Kyle Faloon kicked for three points and Armagh were back in the lead, 15-12 with 30 minutes played.
Belvedere went offside from the restart but Armagh then lost another lineout with the visitors bringing play into the Armagh 22. The home backline strayed offside and Leonard kicked a simple penalty to tie the scores once again at 15 all.
Armagh missed a long range penalty attempt on 35 minutes but returned to the attack with a good break by Evin Crummie. A turnover saw Belvedere clear but the home side were dominating possession and another attack saw Belvedere penalised on their tryline.
Morrow kicked to touch and John Glasgow secured the Armagh lineout. The pack drove for the line and when Belvo dragged the maul down, referee Paul Haycock had no hesitation in awarding a penalty try and dispatched prop Jerry Cahir to the sinbin.
In first half injury time, Armagh were nearly over again when James Hanna found a gap in the Belvedere defence but the visitors line survived intact as the whistle went for the interval. The home side were deserving of their 22-15 lead.
Armagh brought hooker, Jonny Morton on for the second half as Belvedere kicked off in determined fashion. Chris Colvin won a turnover for Armagh and Morrow put in a cross-field kick which was superbly caught by Ryan O’Neill. The number eight slipped the ball to Andrew Willis but the winger’s run to the line was stalled by Belvedere’s scramble defence and a penalty for the visitors cleared the danger.
Belvedere had a chance to punish Armagh when a lose pass was hacked on deep in their half but the visitors were penalised for foul play at the ruck and their scoring opportunity was lost. Belvedere did reduce the arrears on 50 minutes when Armagh were penalised in front of their posts and Leonard’s success kick made the scoreline 22-18. Faloon then edged Armagh further ahead two minutes later with a penalty to make it 25-18.
The home side then continued to dominate the attacking play through multiple phases, but the Belvedere defence held firm.
On 63 minutes, Belvo lost outhalf Leonard to the sinbin for a no arms tackle. Faloon then struck an upright from the resultant penalty but Armagh gathered the rebound only to knock on at the base of the ruck. Scrum half Gerard Treanor joined the action from the bench and made an impact, stealing Belvo possession from a scrum, but his break was spoiled by an Armagh knock on.
With ten minutes remaining Armagh scored their crucial bonus point try. From a lineout 40 metres out, the ball was moved to the left where centre Chris Colvin spotted a gap to get behind the Belvedere defence and a pass to Andrew Willis saw the experienced winger touch down. Faloon converted superbly from the touchline to cap a fine individual performance.
The final whistle went with City of Armagh victorious with an impressive scoreline, 32-18.
Head coach, Chris Parker was pleased with his team’s performance that had built on what had been achieved the week before. “It was great to welcome All Ireland League rugby back to the Palace grounds after 18 months and to have such a large and vociferous support, really helped the squad. We still have areas to improve upon and there will be a lot of hard work needed before we welcome an impressive Shannon side this Saturday.”
This week City of Armagh have another home Energia AIL fixture at the Palace Grounds when Limerick side, Shannon are the visitors and kick off is at 2.30pm.