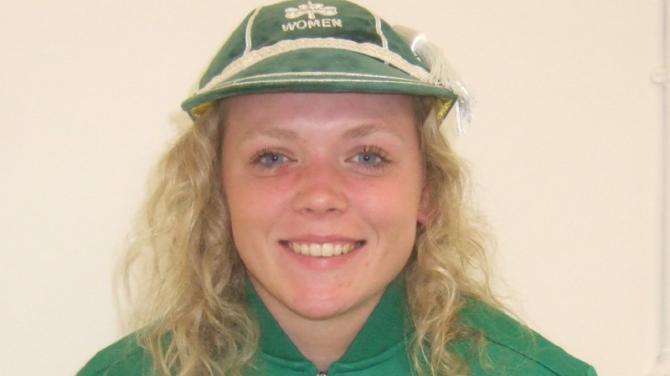 NEW cap Vicky Irwin might have sung ‘I wanna be a Billionaire’ on the pitch post-match, but in truth no amount of money could have paid for the indescribable delight the 24-year-old Hamiltonsbawn woman was left with after her Ireland rugby debut.

The girls in green snatched a dramatic 15-14 victory over Scotland at a raucous Ravenhill on Saturday night thanks to Enya Breen’s last-kick conversion of her own try, which came after multiple phases with the clock almost four minutes into the red.

A record crowd, who had given Ireland such fantastic support on a very wet Belfast night, raised the roof for the home heroes on a night young Ulster hooker Neve Jones fittingly led the way with a superb Player of the Match performance.

However, part of the spotlight afterwards was on sole Ireland debutant Irwin, who had her official cap presentation accompanied by the ritual of being expected to serenade her colleagues in the team circle, and she chose ‘Billionaire’ by Bruno Mars.

Vicky, still wearing her precious cap and a delighted grin, said, “It was amazing, I can’t even put the feeling into words. As an Ulster girl, to make my Ireland debut in Kingspan Stadium in front of a record crowd was brilliant, but for us to get the
win we needed, and in the way we did, is just
so special.

“The support from the crowd was incredible, especially at the end when they were willing us to keep pressing and get over that line.”

The vital victory meant Ireland, who were missing a plethora of sevens stars for the last two rounds of fixtures, finished fourth in this Six Nations which began by losing at home to Wales and also brought inevitable beatings at the hands of professional French and English sides.

Named in Ireland’s initial Six Nations squad, Irwin had to wait until the final fixture for her opportunity to pull on that green jersey she has had her sights set on for so longt.

It feels like long enough now since Vicky and fellow Armagh girl Leah McGoldrick won their first senior Ulster caps aged just 18 in the same stadium back in December 2016 and Irwin’s rugby journey has had a few twists and turns through the years.

There have been two shoulder dislocations, a move from Belfast-based All Ireland League club Cooke to English Premier15s side Sale Sharks in May 2020 and that positional switch from flyhalf to the last line of defence.

The atrocious conditions could have made Saturday evening very difficult for a fullback on debut, but Irwin was glad to get several involvements early on and the converted outhalf proved very safe under the high ball on her first outing for her country.

“We’d done all our preparations in nice weather during the week, but we were aware of the forecast for today and knew we’d have to adapt our gameplan. Especially with it being my first cap, it was nice to get involved straight away and settle any nerves.

“The conditions were challenging but thankfully I caught a few balls and that helps you grow into the game. Playing for Ireland has been a dream for a long time and to get my chance here of all places is incredible.

“This time last year I was rehabbing my shoulder, so I’m grateful to be in this situation now. Winning your first international cap is massive, but I wanted to enjoy the experience rather than get too stressed, and the word ‘fun’ was one of three that I had written on my hand.

“There’s pressure playing in the Six Nations obviously, but going to Sale has given me more big game experience, pushed me to keep improving and I’ve learnt a lot there from (England legend) Katy Daley-McLean,” reflected Irwin, who began her rugby with City of Armagh RFC.

The local club are exceptionally proud of trailblazer Irwin, who was also the first female pupil to receive an honours blazer for rugby in the more than 400-year history of the Royal School, and is a great role model for young girls aspiring to follow in her footsteps.