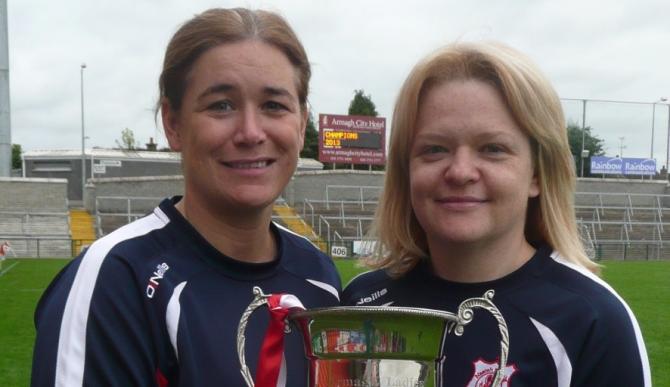 ARMAGH  Ladies have unveiled the experienced pair of Fionnuala McAtamney and Lorraine McCaffrey as their new senior county team management.

The highly-regarded duo take over from Tyrone native Sean O’Kane who stood down last Monday after a single season at the Orchard helm during which Armagh achieved a first ever victory over All Ireland champions Cork but were relegated from Division One of the National League.
Fermanagh woman McCaffrey was part of the all-female management ticket which brought Armagh such success in the mid-noughties while that side’s goalkeeper McAtamney served in James Daly’s backroom team more recently.
Together the pair masterminded Carrickcruppen’s Armagh Senior Championship success in 2013 and returned to the club midway through this season, steering the Lowe’s Lane ladies to another county final appearance.
Their appointment has been warmly welcomed by Armagh captain Caoimhe Morgan and triple All Star Caroline O’Hanlon, with both veteran Orchard heroes now set to continue in the orange jersey next season.